This week the Wall Street Journal (access here) published of the most interesting articles I have seen recently in the field of Aviation. Not just because of the content but due to the fashion in which it has been illustrated (3D).

The article emphasizes on the risks of flying within Asia based on five categories. While the examples are absolutely correct I would even go as far as saying that they can be applied not only to Asia but also Africa and South America. Even Europe has it’s fair share of unique, dangerous airports such as Funchal (Madeira, Portugal).

The author highlights the five major risks as

5. Approach & Landing Accidents (due to pilot error and lack of equipment on the ground)

These are really good points and the examples presented outline a certain pattern of lacks in oversight and procedure. Statistics also speak a somewhat firm language: 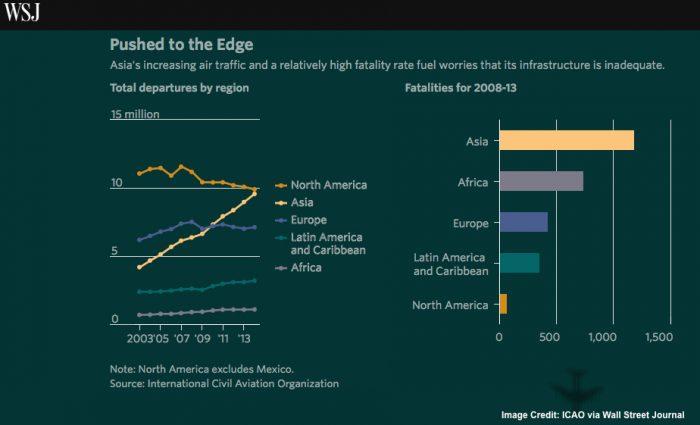 Especially budget carriers might pose trouble here and I’m not necessarily talking about the big names such as Air Asia or Scoot which are (in my opinion) somewhat well equipped and their pilots sufficiently trained. There are many small airlines in tiny countries such as Laos whose name we haven’t even heard of. Next time you are at Bangkok Airport for example just have a look at the departure board, you will be surprised.

With air traffic always increasing and certain populations in Asia (in particular China) becoming more affluent it certainly places a lot of pressure onto the aviation system, putting it to the test of how much it can endure before serious accidents happen.

It’s really a great article, go ahead and check it out!