I couldn’t believe my eyes this morning reading the news at The Guardian (access here). Apparently an Air France Boeing 777 aircraft lost a part of it’s fuselage mid flight which then fell into a Chinese town. 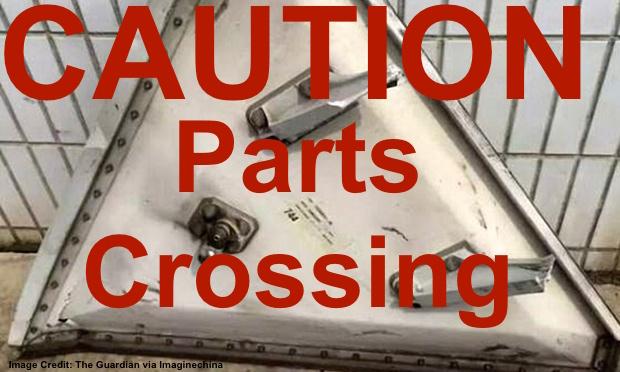 The part in question is a part of the landing gear panel which came off the B777 aircraft on flight Air France AF111 from Shanghai-Pudong to Paris. This particular part weighs 60kg (130 pounds) and one can just imagine the consequences if such a heavy item hits a building, vehicle or a crowd of people.

The Guardian elaborates in the article:

The US aviation giant Boeing says it has asked airlines to address a maintenance issue after a passenger jet’s landing gear panel fell off after takeoff on to a Shanghai suburb. …

“It does not affect the structural integrity of the landing gear nor the safety of the flight.” …

Boeing has issued a service bulletin to the fleet providing instructions on how to resolve the issue.

The problem has to do with fasteners that hold the panel in place.

The Boeing 777 is a very reliable aircraft and so far I’m not aware of similar incidents being reported.

This incident could have resulted in serious injuries and damage on the ground. While I don’t believe the aircraft having a general issue it might rather be a case of a part that came loose and has not been detected through maintenance checks during the brief stopover in Shanghai or (which would be a bigger concern) it has been this way for quiet some time and was not spotted by Air France’s own mechanics in Charles de Gaulle either.