A reader from Germany contacted us via Facebook last week trying to clear up a situation which I personally would have thought is a clear cut case: Swiss First Class Lounge access in Zurich.

Turns out it wasn’t so easy. The reader is traveling on United Airlines code shares and SWISS seems to have tweaked their lounge access rules, yet has not published any of this. The reader works for a U.S. based company that books most of his trips on United / United Codeshares including some travel on SWISS. His message was

Hi, I’ve got a question about swiss airlines lounges. My company booked me on a United flight number operated by swiss in first class based on our contract with UA. I will fly this route monthly for the next half year so I did some research. There was an online discussion in german on Vielfliegertreff.de that Swiss does not allow code share flights into their first class lounge anymore.

My questions are: a) Is that correct and b) is Swiss allowed to do this?

I followed the link he provided and was able to read into the mentioned discussion at Vielfliegertreff (access here). Indeed it seems that at least one traveler has been denied access under a United Airlines codeshare at the LX First Class Lounge at Zurich airport while traveling on a SWISS operated First Class ticket.

The passenger was instead directed to the Swiss Senator Lounge which is usually used for Miles & More Senator Card Holders as well as First Class passengers of non-Lufthansa Group airlines. It was said ‘United Airlines does not reimburse SWISS for the First Class lounge services’. 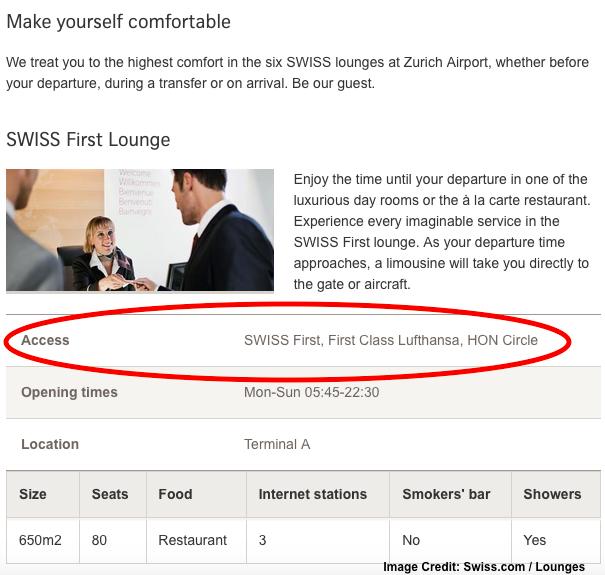 None of this would make one believe that if you are not booked on a sole SWISS (LX) flight number, even if operated by SWISS itself they could refuse you access to the First Class Lounge. Something just didn’t sound right so I contacted SWISS Airlines Press Department and received this response

Following my previous e-mail I would like to confirm that codeshare passengers (holding a ticket with a marketing code other than the LX code) do not have access to the SWISS First Class Lounges when travelling SWISS First.

That is a clear statement, though it does not provide any sort of reason why SWISS would go this (in my opinion) absolutely crazy step to deny codeshare passengers access to the First Class Lounge. I have been to that Lounge many times, it is nice but really nothing special such as the Lufthansa First Class Terminal in Frankfurt. It’s simply a nice, quiet lounge that has a small restaurant and also provides passengers with a car service to the departure gate.

If you are interested, a UA codeshare on SWISS can cost you a quick 13,808 USD. 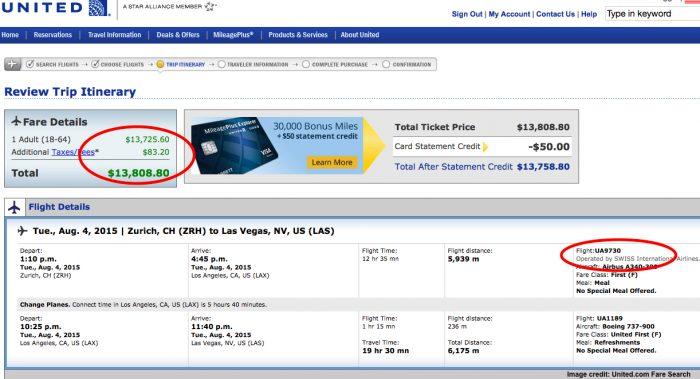 I would assume that SWISS will receive a significant portion of this revenue. Certainly enough to provide the passenger with all services and facilities that the airline advertises. This is bean counting at it’s best and even if it goes back to a dispute between SWISS and United, to fight this on the back of a paying First Class passenger (mileage tickets are always booked on the operating airlines code and therefore do have access) is not only wrong but also sad.

Someone at SWISS Airlines must have lost his/her mind. This regulation simply makes zero sense and I can easily see a passenger going nuts over this.

What could be a reasonable explanation for denying a revenue First Class passenger the corresponding services and facilities?

It is common practice that the operating carrier pays for their own associated ground services as outlined in their product description. That also includes the First Class lounge in Zurich. What is next, SWISS telling codeshare passengers that the Appetizer on board is not covered by their ticket?

Airfare of the Day [First Class] SWISS Amsterdam to Delhi from 2,185€

Airfare of the Day [First Class] SWISS Amsterdam to Bangkok from 2,763€

Airfare of the Day [Business Class] SWISS Amsterdam to Bangkok from 1,323€