As the website airlineroute (access here) reported yesterday, Thai Airways will cease their operations to Los Angeles and Rome with the beginning of the winter schedule on 25th October 2015. 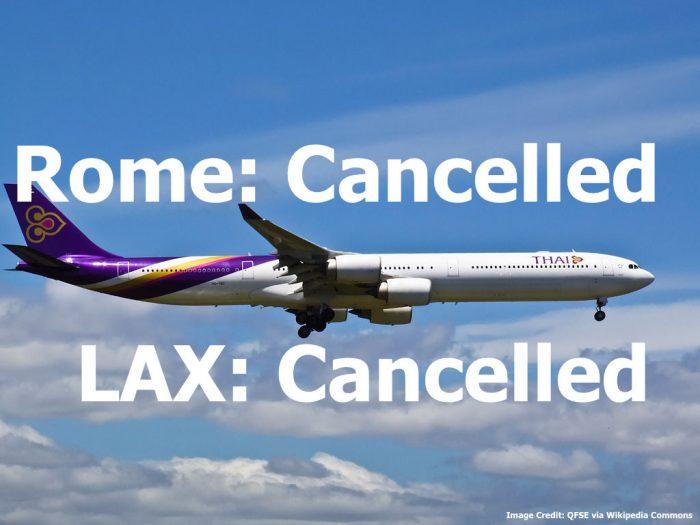 Thai Airways is currently not accepting any more reservations for these flights from that day onwards even though there is no public announcement yet on either Thai’s Italian or U. S. website. Flights to Los Angeles were routed via Seoul before continuing on to LAX, using Boeing 777 equipment. I have flown this route twice before, the last time in fall of 2014 and found it convenient.

Route information as per airlineroute:

Based on current schedule and inventory listing, this would mark the end of THAI’s operation to the US.

The cancellation of the Rome route comes as a surprise to me as the destination is quite popular with Thai tourists, though with the recently increased capacity to Milan most of them might be flocking there now.

These routes, especially the Los Angeles one, must have proven to be not as economical anymore as they used to be. Unfortunately this also takes another Star Alliance option off the table for passengers who wish to redeem miles from South Asia to North America.

The cancellation of these routes comes in the wake of the ICAO and several national aviation agencies levy restrictions against Thailand for deficiencies in their aviation oversight. The U.S. FAA has been inspecting facilities in Thailand most recently (access John’s article here) and was not happy. Should these deficiencies not improve Thai airlines face a ban for all new routes and route modifications.

It’s really a gamble for Thai Airways to cancel these routes now. Should the FAA or the European Union decide to really restrict Thailands airlines then they couldn’t just resume the route.