Here are seven reader questions from the past week (so many good questions coming in!) that I have decided to reply to publicly. You can always email me, leave a note or private message on Facebook, or Tweet me with your questions. 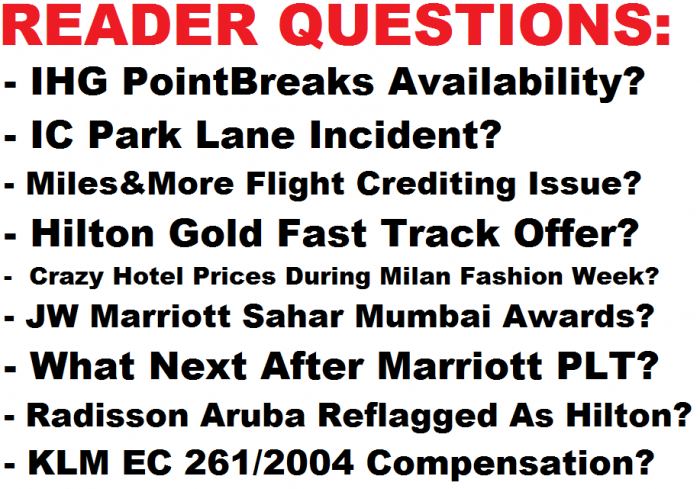 Regarding current IHG PointBreaks list; I’m finding the Crowne Plaza Auburn Hills (US-MI) has no availability for 5K, but plenty of rooms for 20K.

In previous posts, I recall you mentioning that reward nights are reward nights and the hotel does not distinguish PointBreaks nights from other RNs. Did I misinterpret that?

How can there be availability for one but not the other, and does this happen often?

IHG Rewards Club allocates set number of PointBreaks award rooms per hotel. Once this allocation has been exhausted, it will revert to the regular award nights and the hotel is removed from the PB list.

I’m currently staying at the IC Park Lane (London) on points. I got a surprise last night when I cut my foot open on the carpet leading to the bathroom last night. On close inspection, the strip of tiny nails which hold the carpet in place are sticking though.

Both my wife and I managed to hurt ourselves on them, though only I ended up bleeding (nothing too major but still it’s a little sore to walk on today). They quickly sent plasters and someone to ‘fix’ the issue (by bashing with a pair of pliers) and are apparently going to send someone else to fully fix the problem today but there has been no mention of any compensation.

It seems to me that some compensation would be reasonable given that I was injured by their dangerously constructed floor, ended up bleeding, and now have a sore foot. I would appreciate your advice.

I would ask IHG Rewards Club points as a compensation to cover one night of your stay.

I am a Swiss/Lufthansa Senator. Some of my flight miles were not credited over the past year and according to the phone support line there is no chance they will be. I informed them of the flight numbers, ticket #s and booking refs. The support person said they could not access archived data, i.e. data that was older than 3 months. This seems a bit odd. Any thoughts?

Did you have your frequent flier number on the boarding pass? If you did, were the fare classes on those flights eligible for Miles&More credit.

You should check every couple of months that the flights have been properly credited to your account and if not open retro claim request.

I am still a gold from 4 stays fast track which valid til 2016 but never sign up for the airberlin promotion. however, when i tried to sign up it gives “Thank you for your interest but you are already registered for this promotion” Should I register a new account to sign up for this new fast track offer?

This question comes up often now that Hilton has multiple fast track to Gold offers going on.

It seems that you cannot register for the fast track when you still have the Gold status. You can certainly open a new account (against T&Cs). Make sure that you use different email address and physical one as well.

We will be in Milan to visit the world expo from 24th to 27th September which unfortunately coincides with the Milan fashion show so we are finding it really hard to find any reasonable accommodation at a reasonable price.

Do you have any hints on places to stay or ways of getting a more reasonable price?

Sometimes prices come down closer to the even OR they may go way up as well IF the rooms are booked firm.

This probably would be a good time to use points.

I was trying to redeem my e certificate for a free night stay at JW MARRIOTT SAHAR MUMBAI this is a category 5 hotel.

I am unable to book it online though they offer a courtyard at the same city.

I then called Marriott about 5 times and they keep on telling me that they have a technical problem to book this hotel and request me to call next they.

I just checked and the hotel had award availability for some random day on August.

Although Marriott promotes no blackout dates, that is not the case. Hotels can have local blackout dates throughout the year when they don’t accept award reservations.

You also have to bear in mind that with Marriott award rooms are not tied to base level room availability like with Hyatt, Hilton or Marriott. Hotels only require to make certain percentage of rooms available as rewards.

Pat’s Question What Next After Marriott Platinum?

As a Canadian travelling (by car and plane) equally to US, Canada and Europe, with the occasional Asia trip, I think Marriott Platinum works best for me. Footprint is good, service is consistent, they have the best Canadian hotel cc (no forex), and they just bought Delta hotels. I still have Fairmount platinum and SPG Gold (used to be plat) as backups. I didn’t renew Hilton Gold this year.

I’ve been travelling heavily in 2015… with already 82 real nights at Marriott (+15 bonus from CC not even factored in, so that’s already 97 night credits)

– I’ve already secured Marriott platinum for next year. Getting lifetime platinum is an important goal since I’m a young FF in my late 20’s. CC spend on the Canadian Marriott card doesn’t count towards night credits (I never understood why really), so there’s no shortcut for me, I need 750 nights to get lifetime plat.

– You mentioned on your blog that nights past the 75-mark would count twice towards lifetime platinum? Is that 97 nights this year + another 97-75=22 for next year? Is this a glitch in their system or does it really work that way? So that means everything counts double from now on?

So what do you suggest:

1- Keep staying at Marriott because stays count double and I want to secure lifetime platinum asap? I’ll probably get the platinum premier status if I do so, whatever that is.

2- Invest in a secondary program? I already have SPG Gold and Fairmount Platinum from Amex cc. SPG Gold is useless to me (compared to SPG plat which I used to be). Would Hyatt be a better option with their status match? Hilton Gold is easy to get but doesn’t really add value to Marriott Platinum in my  opinion.

3- Burn whatever Marriott/SPG/Hilton points I have, as the Canadian dollar is currently very very low and I already have reached my main goal of maintaining Marriott Plat? I will probably use Marriott points with Miles+hotel packages. Not sure if I should use SPG points for stays (I’m only gold so value is lower…) or transfer to airline miles (which ones do you suggest for business travel to Europe/Asia?).

The Marriott rollover nights count twice towards the lifetime Platinum status. The year when they were earned and again the year which they were rolled over.

I am big proponent of being an elite with multiple programs IF that is achievable that is obviously case with your travels.

Hyatt has relatively small footprint compared to Hilton/IHG/Marriott. Roughly 500 hotels compared to 4,000 to 5,000 with the “big guys”.

The SPG lifetime Platinum status is a worthwhile one and requires 500 nights + ten years as Platinum member. Could be doable in your case IF your travel continues at the same pace.

Hilton Gold is worthwhile and easy to get using one of the recent promos. You could have it by having just three stays within 90 days and keep until March 2017.

It really depends where you mostly travel and if the chains have footprint in those cities. None of them is perfect and that is the reason why I have decided to keep status with most.

I just want to inform you that the Radisson hotel in Aruba has been taken over by Hilton last week. As a congierge level at Radisson this was not a pleasant surprise for us. We booked our holiday in January and contacted Radisson several times that I want a special holiday and received feedback that as a congierge I am special for Carlson and will always receive an upgrade and free breakfast or access to the executive lounge.

We were not informed at all and were not pleasantly surprised when we arrived yesterday that our privileges at Carlson would not be relevant now. We stay here for the next 2 weeks, and received unofficially access to the lounge, but this is absolutely incorrect in our opinion. What is your opinion of this?

These hotel reflags are often problematic for hotel loyalty program elite members unless you happen to have status with both chains.

The situation could have been far worse, however. The hotel could have refused to honor the award stay now that they are affiliated with Hilton (happens sometimes).

I would open a Hilton HHonors account and sign up for the Airberlin fast track offer. You could become minimum of Gold member in just three stays.

Thank you for your web site and advice on dealing with airlines. After days of attempting to communicate with KLM through Facebook and Twitter (their only customer support portals) I finally received this message. I guess a “refundable travel voucher” is the same as cash? Can I just ask for a check? Of course their reply link returns the message “unable to process this request”. I’m beginning to suspect they hired consultants to make the customer care experience as difficult to navigate as possible.

“I am sorry to learn your trip to Amsterdam was disrupted on July 17th. I have reviewed our records, and I see that your flight was diverted due to a landing gear problem.

It was brought to my attention your luggage was also delayed and I truly regret this situation. Unfortunately, there was no receipts attached to your request. In order for me to fully review your claim, I would ask you to submit them again, with the link above.”

It is really unfortunate that you must name & shame KLM publicly on Facebook or Twitter before they take any action.

It is my interpretation that you can get tha voucher refunded but that may require paying a visit to City or Airport ticket office. I guess that KLM hopes that there would be breakarage on these vouchers. I would request KLM to wire the payment to my bank account.

Keep the emails and messages coming. I will have these READER QUESTION(S) pieces at least once a week (sometimes more often) and try to cover issues that would help LoyaltyLobby readers