Japan’s All Nippon Airways (ANA) has won the race to be the restructuring partner for the bankrupt Japanese discount carrier Skymark Airlines. Delta Airlines who was also interested lost out in the bid. 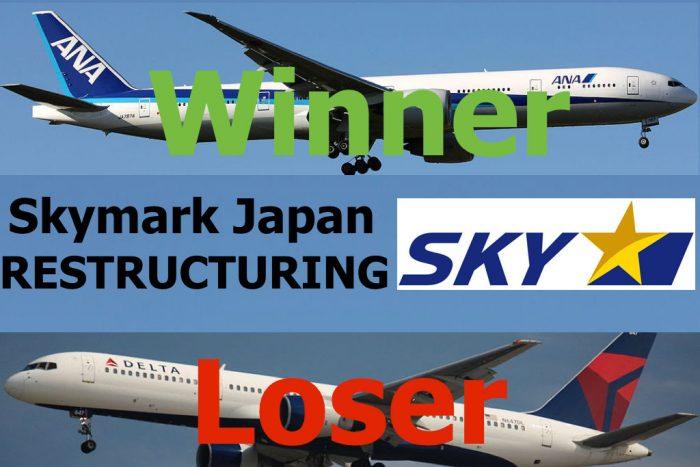 Key point of interest for assisting Skymark in the turnaround are the valuable slots at Tokyo-Haneda airport which the budget carrier presently holds.

As Reuters (access here) reported, creditor agreed to allow ANA to lead the turnaround plan of Skymark and has therefore access to the 36 landing slots at Tokyo-Haneda airport that are currently held by the budget carrier. Haneda is extremely crowded, especially during the evening hours and this will give ANA the edge over rival Japal Airlines (JAL) at Tokyo’s very popular city airport.

Delta Airlines was interested for a long time, also eyeing these slots, however the (mostly japanese) creditors saw a lesser risk associated with ANA.

ANA operates airlines in Japan, has already discussed business plans with Skymark and is close to Prime Minister Shinzo Abe’s government, the creditor added, declining to be identified due to the sensitivity of the matter.

More than 170 creditors voted on the proposals in two rounds – the first weighted by amount owed, while the second gave each creditor an equal vote. ANA, which has offered to buy 16.5 percent of Skymark, won 60.5 percent of the first round and more than three quarters of the second.

For Delta, this is bad news as they were seeking expansion in Japan, a country where the SkyTeam carrier does not have any alliance partner. Currently Delta uses Tokyo-Narita as a large Hub for it’s flights into North- and Southeast Asia.

“Delta is a mega carrier and therefore a daunting opponent, but it had a number of hurdles to overcome,” Toyuki Nagamine, a director at ANA said at a press briefing with representatives from Skymark and its financial backer private equity firm, Integral Corp, which supported ANA.

For Delta, the decision is a lost opportunity to gain a bigger presence in Japan where it does not have an alliance partner.

The background of how it came to the bankruptcy of Skymark is also very interesting. It seems like their fate was sealed when they decided to place an order for Airbus A380 aircraft which they were unable to fulfill.

Skymark’s failure came after its finances were stretched by plans to fly Airbus Group SE A380 superjumbos on overseas routes. Airbus demanded a $710 million cancellation fee after the airline was unable to keep up with payments.

Airbus, Skymark’s second-biggest creditor, sided with ANA, people with knowledge of the matter told Reuters earlier in the day.

What Reuters conveniently left out is that ANA allegedly struck a deal with Airbus to take some aircraft off their hands, a step that could prove costly for the Boeing focused carrier. The Nikkei Asian Review (access here) elaborated on this:

The odds began to move in ANA’s favor late last month when the company made a promise to Airbus of future aircraft orders, carefully couched so as not to trigger a disclosure requirement, people familiar with the matter said. It is unclear how many or what model ANA pledged to buy. But a likely choice is the A380 superjumbo jet, which Skymark had planned to fly on international routes before its finances took a turn for the worse. …

ANA had maintained it would make no new aircraft orders to secure a place among Skymark’s sponsors. But at a news conference Wednesday, Nagamine left that possibility open.

For ANA, adding the A380 to its fleet would run counter to its shift toward fuel-efficient midsize jetliners. The company also could wind up with a capacity mismatch that results in higher fares.

Skymark currently has court recognized liabilities of 152.2 billion yen ($1.2 billion) with additional 157 billion yen remains under dispute. Yet despite these liabilities, ANA was willing to take the risk.

“It [ANA] was so reluctant to let another airline get Skymark’s landing slots at Haneda Airport that it was willing to take those risks,” a person familiar with ANA’s strategy said. Access to the Tokyo-area hub is seen as a cash cow.

Delta was clearly outmaneuvered in this case which did not surprise me. Japanese prefer to do business with a local company especially when it comes to matters of trust and reliability. In this case there are billions of Yen at stake and having a Japanese partner puts the creditors mind at ease.

The Airbus deal is indeed interesting even though there are no details yet. In my opinion it is highly unlikely that ANA will purchase A380 jets because those simply don’t suit their fleet. Many airlines that used A380 to Japan switched back to conventional A340, Boeing 747 or the popular and fuel efficient Boeing 777.