One employee at London’s famous department store Harrods loved loyalty points too much and saw her employment terminated over the fraud. 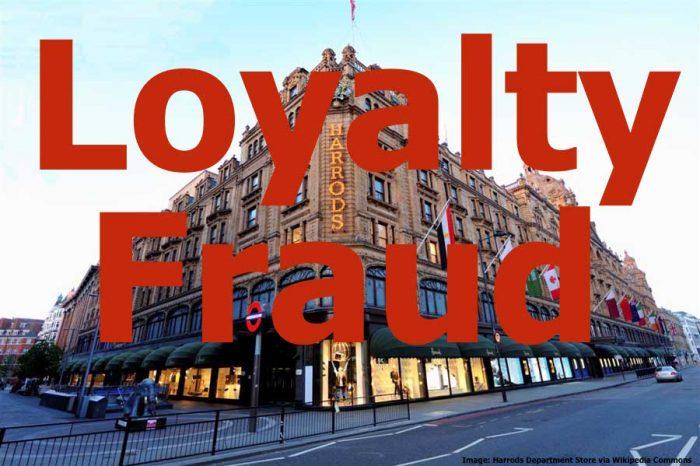 The 28 year old Thai national worked in the Export Bureau Department (some fancy title for GST refund counter?) and while scanning receipts attached her own loyalty card number to purchases if customers did not claim them.

The Telegraph (access here) reported about the matter last week, even though I find the article strangely written as far some earning and value are concerned.

Chomchanok Hongsakuulvasu, 28, wept in the dock as she admitted a three-year scam to accrue nearly 850,000 Reward Card points to spend at the luxury Knightsbridge store. The points would have been worth almost £3,000 to spend in-store. While working in the Export Bureau Department, the Thai national scanned the receipts on to her own loyalty card when customers did not want them.

Hammersmith Magistrates’ Court heard the points would have cost more than £280,000 to collect legally.

Harrods bosses eventually rumbled the fraud when Hongsakuulvasu purchased items and it was noticed she had an abnormal amount of points on a loyalty card registered under a variation of her name. In court she pleaded guilty to fraud by false representation.

She was given a 16-week jail sentence suspended for a year and ordered to pay compensation of £7,513.25 to Harrods.

The original article mentions several times that the points ‘cost’ 280,000 GBP to collect. I think it should be worded much differently. That amount is the value of the merchandise and being Harrods who sells many luxury items they have a huge profit margin on their products.

You can find the details and benefits of the Harrods Rewards Program here. As I expected their program also has a variety of status levels, after spending 10,000 GBP the card will be upgraded to ‘Black’, earning 3 times as many points as the basic level membership. I wasn’t able to find the actual redemption value though.

I would imagine that putting 280k GBP of spend on your loyalty card will automatically trigger some review of the account, not because of fraud but because this is a very good customer and the department store should take care of such a client.

Looking at the article it is mentioned that her 850,000 points have a redemption value of just below 3,000 GBP. If that is true it would be a shockingly bad rate, about 1% of your spend as return. As mentioned above the profit margin must be huge on many items they sell.

This modus operandi is not exclusive to retail. Airline and hotel employees have been practicing this for a long time already. There was a recent Fortune article (access here) that outlined how employees are responsible for more than half of all retail theft.

Apart from it being a bad idea and criminal, this employee should have been more careful. To anticipate that you can place such huge spend on a loyalty account and not raise flags is simply stupid. The sole purpose of loyalty programs is to bind and analyze your customers spending.

The sentence is pretty harsh. I’m surprised about that considering the rather low monetary damage of 2,800 GBP. Looking at the amount of points is irrelevant to assess the damage, it says absolutely nothing about their value. Of course 850,000 sound a lot more dramatic than 2,800 as far as numbers are concerned.