The International Air Transport Association (IATA) publishes regular reports on the airlines performance and profitability. The current report attests carriers a pretty good run during the past few months. 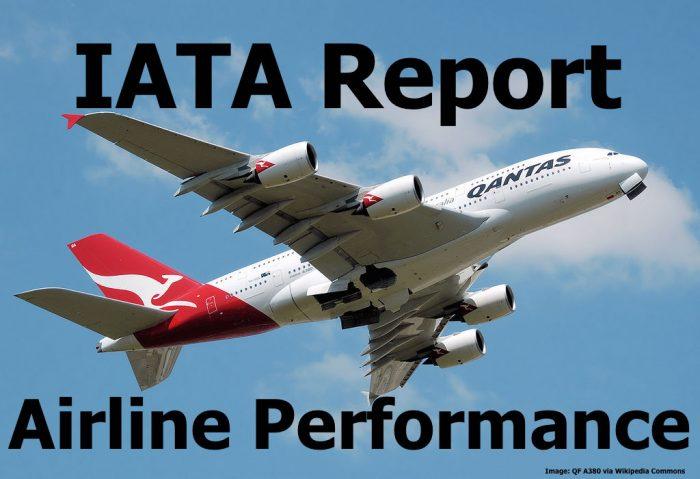 Most of these positive results are based on low fuel prices during June and July which sent airline stocks soaring again.

The IATA Airlines Financial Monitor (access here) is a bulletin that offers a broad analysis of the current economic situation as well as trends that will impact industry.

It outlines that despite lower yields, the factors contributing positively outweigh and have a strong impact on the results which look pretty good overall, in particular for the U.S. based carriers.

We will have a look at a few key points outlined in the publication. The most visible result can be seen in the stock performance of the listed carriers.

The FTSE Global All Cap rose just 0.5% over the month. Airline share prices were in decline throughout Q2 as a result of investor profit-taking, particularly in the US, as well as the strength of the US dollar which was placing upward pressure on US dollar denominated costs for non US airlines. 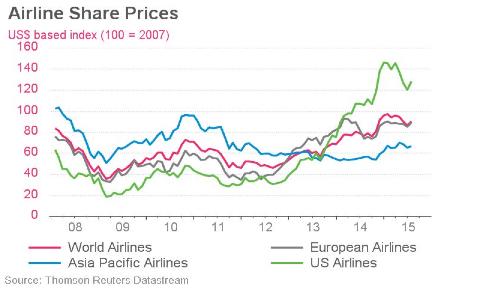 Profitability also increased dramatically across the field even for previous ‘problem childs’ such as the Latin American carriers.

The increase was driven by North American airlines, where consolidation and lower fuel costs have resulted in a significant boost to profitability.

Airlines in Asia Pacific and Europe are also showing gains on a year ago, supported by cost cutting measures as well as easing fuel cost pressure.

Meanwhile the price of crude oil which contributed so largely to these positive results plummeted further and as of today (11th August 2015) reached 44.50 USD per barrel.

Yesterday, they Wall Street Journal (access here) reported that it is likely that the low oil prices will stay for some time to come.

The oil market is signaling that prices could stay lower for longer, delivering a fresh blow to hard-hit energy exploration-and-production companies.

Benchmark U.S. oil futures for September delivery are nearing the six-year low hit in March. But contracts for delivery in later years have taken an even bigger hit, with prices for 2016 and 2017 already trading below their March lows.

That indicates that investors, traders and oil companies see the global glut of crude oil persisting beyond this year.

It will be interesting to see how the airlines will perform in the long run if this is indeed the case.

The IATA report further elaborates on the falling yields since the beginning of 2015.

The weakness in yields likely reflects downward pressure from earlier declines in fuel related costs and stronger growth in capacity relative to demand. 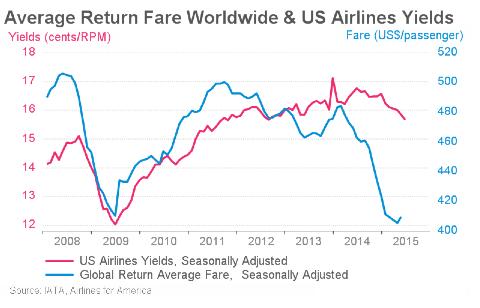 A very interesting report with even more interesting results as far as the good performance is concerned. It’s always great to see airlines actually make money and in turn being able to invest in their fleet, products and services.

One factor that seemingly has not been specifically mentioned is the vast amounts of ancillary revenue stemming from non-ticket sources, such as baggage fees, seating options, priority services etc. I would imagine that these have a strong positive effect as well but compared to the impact of very low fuel prices likely a drop in the bucket.

The other side of the medal is that with strong performance, labor groups start to rally and try to negotiate better pay for their union members. Labor action caused massive disruptions during the past year, especially in Europe.