In the past months I flew a couple different airlines on Airbus A380 First Class. One feature that was interesting to compare was the On Board Bar which some airlines opted for when ordering the plane.

End of July I went on a trip with Qatar First on their Bangkok Route where the A380 is used as well and the service was phenomenal.

Now as I said I have flown a few A380 and other planes that had this service. Especially during daytime flights it can be a fun place to be and on some routes a quite obnoxious one too. By the way stay tuned during the next week, I have something special for you guys!

I have experienced a Bar Service on

From the above list, Virgin Atlantic was the pioneer of this concept in modern days since the ‘golden era’ of flying ended. In Virgin’s Boeing 747 and Airbus A340 ‘Upper Class’ it was not uncommon that the flight actually developed into a small party. It got tuned down a bit in recent years after this feature became a common sight with other carriers as well. Still, some trips are still very fun indeed and Virgin is known for their hip crew as well. I heard there is also a bar installed on the new Etihad A380.

Like any traditional bar the whole setup and mood depends a lot on the barkeep and also the crowd. The staff on my recent Emirates and Qatar flights was super fun and really outstanding.

Korean Air was a bit reserved, in fact all 4 round trips I did with them had rather mediocre staffing especially as far as communication was concerned. The Bar itself on the Korean Air A380 was a bit small too. It is sponsored by Absolut Vodka. 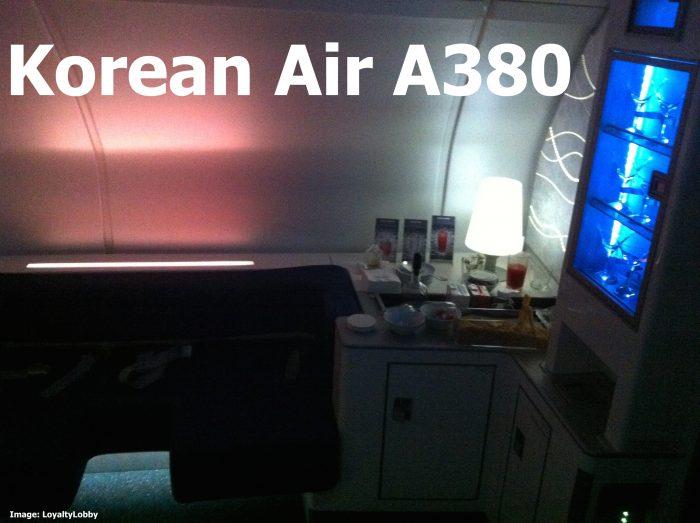 What was interesting on Qatar is that at the bar, they still served Krug Grande Cuvee champagner as well as Taittinger Rose. Krug used to be available in Business Class as the standard champagne but Qatar discontinued that. They do however still serve it at the fantastic Al Mourjan Business Class Lounge in Doha. That lounge is in my opinion the industry benchmark these days and let’s many airlines pale in comparison.

This shows that the onboard lounge can be a very good place to mingle if you are in Business Class. While comfortable I find myself restless in Business after a few hours. Spending an hour or so at the lounge and sipping good champagne and a cocktail helps to pass the time. Keep in mind some of these flights such as Dubai-Sydney on Emirates are very long.

One thing is important though, some airlines were smarter in allocating this lounge than others. Having the lounge almost immediately behind the last row of Business Class without much noise buffer almost certainly brews up complaints. As I mentioned above, something will be featured here on LoyaltyLobby very shortly in regards to that.

I like these lounges / bars and see it as an important innovation on the road to customer satisfaction and engagement. It takes the dull ‘everyday’ feeling away from ‘yet another business class flight’ especially for the frequent fliers.

Flying in First Class I would probably not make a tremendous effort to spend much time at the lounge. However I had staff bring me a bottle of premium wine / champagne to the lounge before if it’s only being served in First but not in the social area. Such as as the fabulous Billecart-Salmon Brut Rose champagne which Qatar serves in First Class.