There appears to have been bomb attack next to the Erawan Shrine in Bangkok that is very close to the Grand Hyatt Erawan hotel. 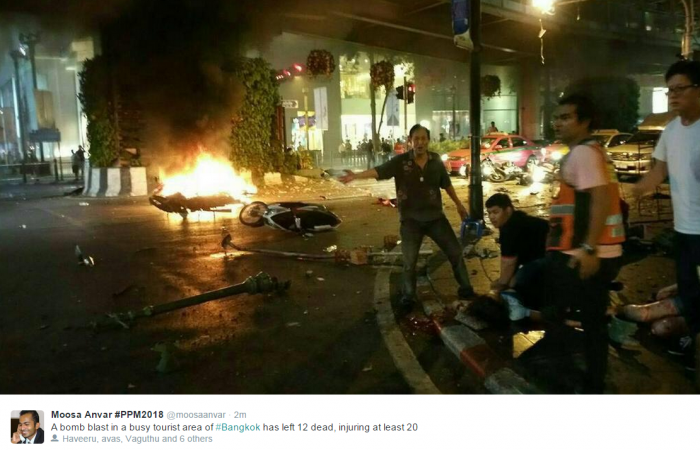 People and media are reporting that more than 10 area dead and body parts all over the place.

Here’s an excerpt from BBC that you can access here:

Local reports suggest at least 12 people have died and dozens have been injured.

The BBC’s Jonathan Head, who is at the scene, says there is a huge amount of chaos, with body parts scattered everywhere.

The attack took place close to the Erawan Shrine in the capital’s central Chidlom district.

Our correspondent says this a very well known shrine in the centre of Bangkok, next to a five-star hotel.

He says people around the shrine were hit by the full force of the blast.

Erawan Shrine is very busy day and night. Many locals pay respect and there are religious performances all the time. I have walked past it many times over the years on my way/to from Grand Hyatt, Courtyard and St. Regis hotels.

It is interesting to who is behind this attack. There are some disturbances in the Southern Thailand and the mainly non-violent demonstrators before and after the military coup. We have to remember that part of the Central World complex was burned down few years back and shortly fixed.