Roughly an hour ago an explosion occurred in front of the popular Erawan Shrine in the center of Bangkok at the busy Ratchaprasong intersection (right in front of the Grand Hyatt Erawan Bangkok), killing at least 12 people. 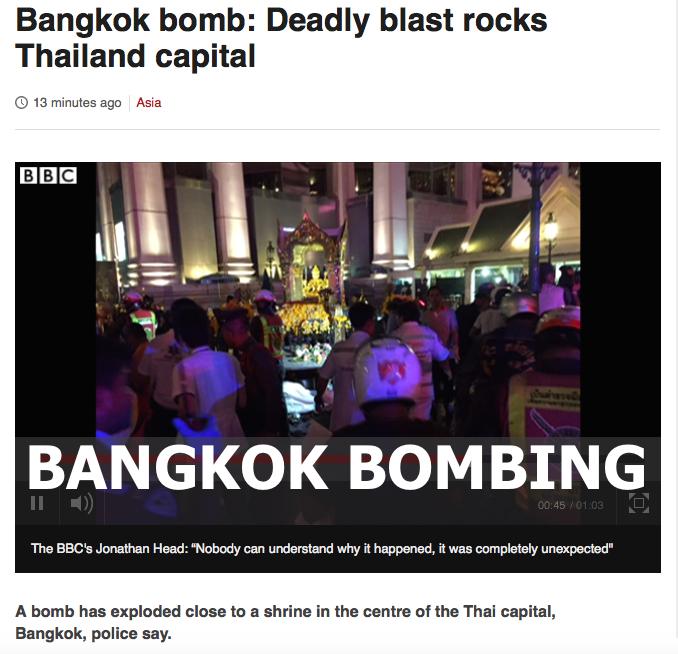 As per current media reports police says this explosion was the result of a bomb and special bomb squads are in the area to deal with possible remaining threats.

EDIT (John): Sebastian actually messaged me the following on FB before I read about these incidents from media and wrote the other piece: “Something just blew up at Ratchaprasong by the Hyatt. Walked by there 10 min before.”

This reprehensible act shocks Bangkok residents and brings memories of the bloody history of street fights and burning buildings that took place at the same site in 2010 when anti government protesters burned down parts of an adjacent shopping mall.

Local reports suggest at least 12 people have died and at least 20 more have been injured.

The attack took place close to the Erawan Shrine in the capital’s central Chidlom district.

The explosion occurred at about 19:00 local time (12:00 GMT), with police saying it may have been caused by a motorcycle bomb. No-one has yet said they carried out the attack.

Some reports said foreign tourists may have been among the casualties.

The explosion was on the Ratchaprasong intersection, which has been the centre of political demonstrations in recent years. [The BBC] correspondent says bomb attacks in Bangkok are extremely rare.

There has been a Muslim insurgency, but this has been largely confined to the south of the country and attacks rarely take place elsewhere.

But Bangkok has seen a decade of sometimes violent rivalry between political factions.

The military took over ruling the country in May last year, removing an elected government following months of unrest.

At the same time CNN (access here) reports that a bomb squad is currently still in the process of defusing another detonation device.

Police are sealing off the scene of a blast near a popular Hindu shrine in central Bangkok because a bomb in the area remains active and needs to be defused, police at the scene told CNN on Monday.

Bomb squad members in blast suits responded to the area, and an officer announced over a loudspeaker, “The situation is still not safe. Please all stay back. There might be another bomb in the area.”

As bad luck has it I just arrived back in Bangkok 2 days ago and was actually at the same spot this afternoon, walking from the Hyatt to the Siam Paragon Mall. The Erawan shrine is very popular for locals and tourists alike plus the evening times are especially busy with visitors. A truly appalling act for which any decent human being can show nothing but disgust for.

Nobody can say anything about who is responsible for it but the scene is a sad reminder of what terrible things people are capable of.