A Singapore Airlines flight from Istanbul (Turkey) back to Singapore suffered a bird strike right after takeoff, forcing the crew to immediately return to the airport. 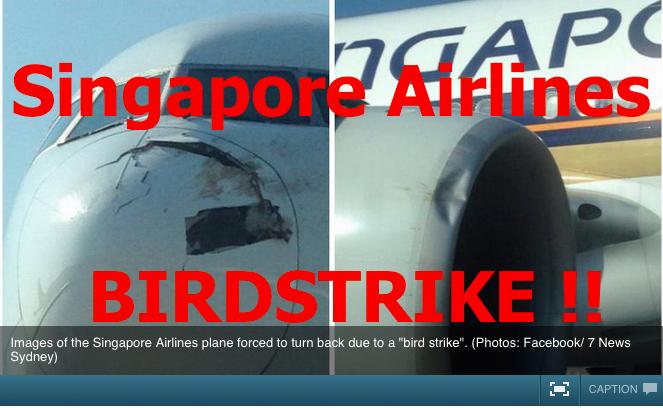 Back on the ground the damage could be surveyed and as can be seen from the image it was quite substantial. Flight SQ391 suffered only material damage however.

The award winning Singapore flag carrier has had a bit of a bad run this year. Just this May, Singapore Airlines had their last incident where the aircraft suffered double engine failure (access related report here).

This time it was another unfortunate mishap that birds crossed the path of the Beoing 777-200 Aircraft right after takeoff from Istanbul’s Ataturk airport. You can access Channel News Asia’s news article related to this incident here.

Singapore Airlines (SIA) flight SQ391 was forced to turn back to Istanbul on Monday (Aug 17), after the plane encountered a “bird strike” following take-off, the airline told Channel NewsAsia on Tuesday.

All 255 passengers and 14 crew disembarked normally, the carrier said.

The Boeing 777-200 operating from Istanbul to Singapore was originally scheduled to depart the Turkish capital at 1.30pm (Istanbul time) on Monday and arrive in Singapore at 5am (Singapore time) on Tuesday.

As far as Singapore Airlines staff said, the re-accommodation of the passengers went rather smoothly:

“Arrangements have been made for passengers to be re-booked on alternative flights into Singapore or accommodated in hotels. A relief flight from Singapore to Istanbul will be deployed today,” SIA said. The relief flight is estimated to depart Istanbul at 2.40am (Istanbul Time) and arrive in Singapore at 6.06pm (Singapore Time) Tuesday.

Not all passengers seem to agree with that judging by the comments on Singapore Airlines Facebook page. 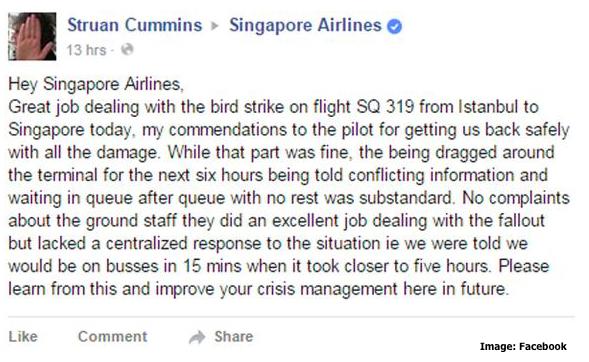 I guess that it would take a few hours to arrange passengers at an outstation wouldn’t be too unreasonable but six hours sounds excessive. In my opinion after 2-3 hours latest passengers should have alternate reservations and necessary accommodation in their hands. It’s also more or less customary that the airline provides food & beverages to the passengers which (as per the ongoing conversation) did not happen either.

It’s certainly not SIA’s fault that this bird strike occurred and the primary concern is getting the aircraft, crew and passengers back on the ground safely.

The management of the situation at Istanbul however seemed to be a mess which honestly doesn’t surprise me. Singapore Airlines has that one flight and only minimal staff of their own, the majority of the work at such outstations is being done by a handling agent or leased alliance staff (in this case likely Turkish Airlines as the Star Alliance home carrier in IST). Maybe the emergency manual was either of no good use or was never seriously considered in the first place.

Qatar Airways has today announced that they would require a negative Covid-19 RT-PCR test from seven additional countries effective August 13, 2020. Passengers that don't...

Marriott Retires “Make a Green Choice” Program & Housekeeping Only By...