A reader contacted us via email yesterday that his flight Toronto-Athens on Skygreece Airlines has been cancelled and the airline seemingly did so for 4 days in a row due to ‘operational considerations’. 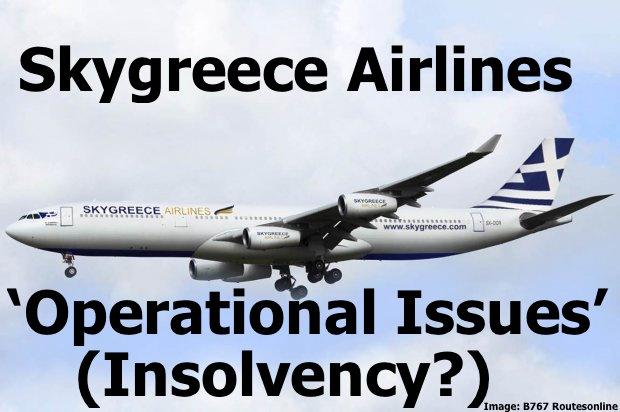 Skygreece Airlines is a small Greek airline owning only one Boeing 767 aircraft and operating their regular New York flight with an Airbus A330 owned by the Bulgarian BH Air.

I had a brief look at their website and while the planes look decent and the website well done and especially functional, I really don’t like this sort of stop and go operation which their scheduling suggests. In addition, owning only one aircraft means that the entire operation comes to a standstill should something happen mechanically or due to regular operational delays such as weather.

When I tried to find any available flights (at least ex Canada, these routes are operated by Skygreece own B767) I couldn’t find any available seats which makes one assume the airline stopped selling tickets altogether. I can hardly imagine they are actually sold out completely. The frequency was very limited to begin with as one could imagine with such a small fleet.

In regards to the cancellations ex Toronto you can access the press release here.

IMPORTANT MESSAGE TO ALL PASSENGERS TRAVELLING BETWEEN AUGUST 17 AND AUGUST 20, 2015

DUE TO OPERATIONAL CONSIDERATIONS, SKYGREECE AIRLINES NEEDS TO DELAY ALL FLIGHTS.

THIS FLIGHT IS NOW RESCHEDULED FOR FRIDAY AUGUST 21, DEPARTING FROM ATHENS AT 06:30 AND DEPARTING FROM ZAGREB AT 08:40 – ARRIVING IN TORONTO AT 12:20

NEW DEPARTURE AND ARRIVAL DATES WILL BE POSTED THURSDAY.

Operational considerations sounds a bit vague to me. It could mean anything, the aircraft needs maintenance, the flights are not full enough to justify a flight (hardly I would say as it’s peak season for Greece) or simply the airline ran out of money to pay for the expenses of operating the flight. With the dire financial situation of Greece as a whole it wouldn’t be surprising but since there is no official statement in that regard it can not be seen as a fact.

Passengers effected by these cancellations are eligible for compensation as per EC261/2004 regulation applicable to European carriers and those flights departing the European Union. This includes a cash compensation of at least 600 EUR per passenger as well as re-accommodation either on another flight or locally in a hotel plus meals. You can do the math how expensive that will be for all passengers involved.

The Canadian news outlet Citynews (access here) also reported about the ‘delay’ (which in my opinion is a joke, a delay is a few hours and not days – this is a cancellation and nothing else).

Travellers booked on SkyGreece flights experienced another morning of frustration at Pearson International Airport on Thursday.

A 7 a.m. flight was delayed, making it four-straight days of flights that haven’t taken off. …

“There were a couple excuses. One was the pilots were sick, and the other one was they needed a part for the plane and it’s in Montreal,” Mijo Cupor, a traveller from Sudbury, told CityNews on Thursday.

If you have a flight or tour package booked with Skygreece Airlines I would make sure to have in the very least a suitable travel insurance. Some insurance policies include an Insolvency Clause as well. If you are booked through a tour operator then the company is usually responsible to re-accommodate passengers in another way should their airline stop operating flights due to whatever reason.

It’s hard to say what is happening with this airline especially with such a vague press release. If I was a passenger I’d monitor the situation closely.

As far as compensation per EC261/2004 is concerned, needless to say even if a passenger has a valid claim it will be completely worthless if the airline folds and there is no money to be paid out. Customers who paid with a credit card can initiate a chargeback with the issuing bank though should their flight not operate.