A dispute over a passengers ‘man purse’ on board an EasyJet flight from London-Gatwick to Belfast left the individual with a bigger shock than he bargained for.

After insisting of taking two pieces of carry-on on board (EasyJet only permits one unless you pay extra) and constantly wearing said ‘man purse’ an argument broke out and police was called.

After the officers arrival the situation escalated further and the passenger was approached with a stun gun, tasered and taken off the aircraft.

Officers boarded the plane at about 08:00 BST following reports a passenger had become abusive in an argument over luggage.

Sussex Police said a 37-year-old man had been arrested and detained under the Mental Health Act.

A police spokesman said the man, from Belfast, was arrested on suspicion of breach of the peace and obstructing/resisting a constable in the execution of their duty.

Following an examination by doctors, he was detained under the Mental Health Act for admission to a psychiatric unit for further assessment and treatment, Sussex Police added.

All this because the passenger couldn’t part with his purse? I don’t see a problem of him keeping the thing during the flight unless he is seated in an exit row. Why the brawl?

In a statement, Easyjet said police were called to the aircraft “due to a passenger behaving disruptively”.

Passenger Niall Copeland tweeted: “Man getting arrested on @easyJet flight home to #Belfast because he wants 2 pieces of hand luggage!” and “All because he was insistent of wearing his man purse.”

The other passengers were taken off the plane following the arrest, police said.

Flight EZY831 was delayed by just over two-and-a-half hours and the plane took off just before 10:55.

This situation must have gotten out of hand very quickly. I don’t understand why he was allowed to board with two items if he was only allowed one per his reservation/package. 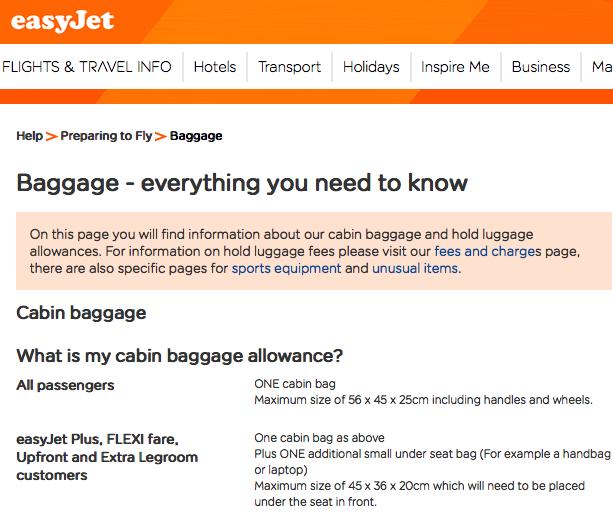 So it seems like EasyJet policy is that a personal item must be placed under the seat and he insisted of wearing it, after the crew approached him he went berserk. Oh well…

These budget carriers have very strict guidelines as far as baggage is concerned and people should familiarize themselves with these rules. Be prepared to pay extra if you know you exceed the limit and don’t try and flaunt the rules at the airport. Sometimes with all baggage charges it’s cheaper to just book a mainline flight instead of going the budget carrier route.

I have flown EasyJet a long long time ago from Germany to France when it was all very new. Back then it was ok. Today I couldn’t deal with the antics of these european budget carriers anymore and I’d personally rather stay at home than using them. In Asia it’s still relatively ok but even here I find its often cheaper to take regular flights than booking Air Asia or Tiger Air.