Two weeks ago, I whined about my terrible hotel internet experiences in Spain (access here) and now I have moved on to Portugal with this non-working hotel internet series. 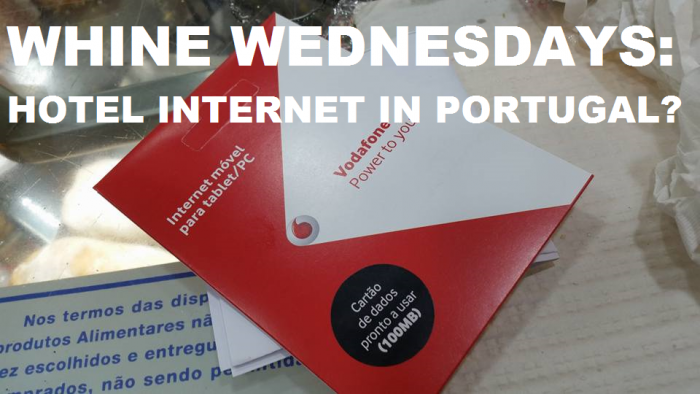 Between Spain and Portugal I did spend some time in Finland, Estonia, Sweden and UK that didn’t have any of this non-working internet non-sense that seems to plague the South of Western Europe.

The other night I checked into the InterContinental hotel in Lisbon around midnight and immediately reported the unstable internet that they then were trying to fix for over two hours (should have cut my losses at this point and just moved to another hotel).

After a good night’s sleep, I tried to start working again in the morning only to find out that they hadn’t fixed anything. I spoke with the hotel’s IT manager that came to troubleshoot the issue that they thought would be due to a faulty router.

I went to check another suite 10 floors up that had exactly the same issue. Again I spoke with the IT manager who said that he was experiencing packet loss as well.

Next I talked with the front desk manager and requested that he get me a local sim card that I could use for tethering on the cell network because they were not apparently able to solve their internet issue. He was not able to do that.

This resulted in me booking another hotel, checking out (canceling rest of the reservation) and soon filing a complaint with the Ambassador Service Center.

I am not sure what is wrong in South Europe that makes it so challenging when it comes IT and overall incompetence with hotel internet services? The manager at the InterContinental offered to waive the charge of the night that I declined. I rather seek adequate points based compensation later.

This was the first time this year that I had to check out from a hotel to get any work done. One would think that having working internet would be one of the top priorities for hotels in today’s day and age? Sadly this appears not to be the case in this region, however.

And yes. I gave up and went to Vodafone store late yesterday and bought a local data only SIM card for 15 euros that came with 15GB data for a month. It is pathetic that a hotel guest needs to do this.