Another wonderful story reached us from Beijing today where a lady decided to drink a whole 0.7L bottle of cognac at the security checkpoint instead of disposing of the bottle. 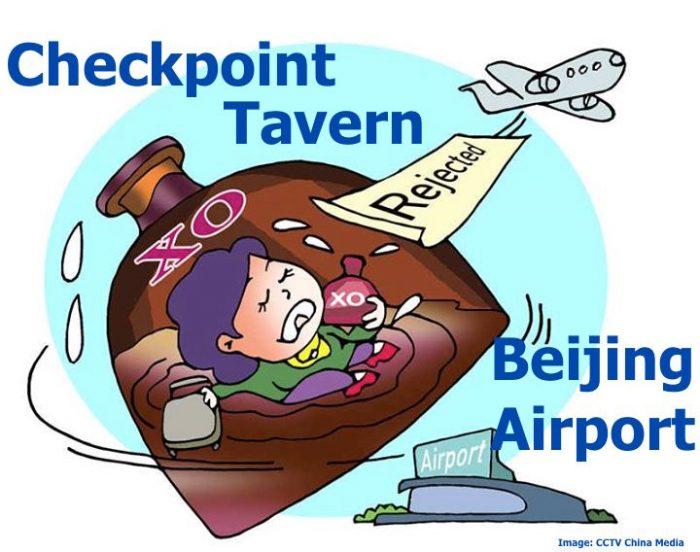 The passenger arrived on an international flight and forgot to put the bottle purchased at Duty Free inside her checked baggage before proceeding to her domestic flight from Beijing to Wenzhou. The bottle exceeded the 100ml limit for liquids in passenger carry on.

A Chinese woman passenger who downed an entire bottle of expensive cognac at Beijing’s main airport was barred from boarding because she was “too drunk to fly”, a local newspaper reported.

The woman, surnamed Zhao, was found rolling on the floor at a boarding gate at Beijing Capital International Airport, shouting and screaming, according to a police officer who attended the scene.

“She was so drunk… she couldn’t even stand up herself. We took her to a room in a wheelchair so she could rest,” the officer told The Beijing Times.

The captain of the Wenzhou-bound flight refused to allow Zhao on the plane on Friday as she was travelling alone, and was concerned that her condition could affect safety on board.

According to the report, Zhao was stopped from bringing a bottle of Rémy Martin XO Excellence in her hand luggage.

How anyone could think they are capable of drinking such an amount of strong liquor is beyond me. She probably hasn’t eaten much on her arriving flight either.

According to a staff member of the airport, Mrs. Zhao said it was too wasteful to discard the liquor that she spent more than 100 Euros (114.7 USD) on. Besides, the limited time didn’t allow her to check-in the bottle. However, what Mrs. Zhao failed to take into account was her drinking capacity. After downing the entire bottle, she got completely drunk and lost her mind. Later on the airport staff called the police to take care of her.

The incident sparked a hot discussion on Sina Weibo, China’s biggest social media platform, for its resemblance to a plot in the Chinese blockbuster movie Lost in Journey, in which the main actor drank a bottle of milk before boarding.

Time constraints can be a valid concerns in such situations however people should come to their senses before doing something this stupid. I wonder how much time the woman needed to ‘recover’ from such an intake of liquor, I’m actually surprised she didn’t require medical attention for alcohol poisoning.

In Beijing, the airport has a very unfortunate structure for these sort of incidents. Because of the large area the airport is separated into three parts: Main Terminal (Check-In/Arrivals), Domestic Gates, International Gates. The terminals are connected with a tram with the security checkpoints located in the individual departure hall, not the main terminal. This leads to a large amount of prohibited items passengers have to dispose of everyday since they can’t just return to the airline counters and check-in their hand baggage. Especially at the International Departures where security is located behind the immigration counter this proves to be impossible since you have technically already left the country.

Almost everyone has been in a similar situation where we forgot a nail file, scissors, a small knife or whatever liquid in the carry on suitcase. Sometimes we just have to cut our losses and move on.

The new ticket to get home after this little exercise cost the passenger likely more than a bottle of XO so it will likely be the last time she pulled something like this.