Travelers who have been to Phuket Island, Thailand before know about the antics of the horrible taxi mafia that is established on the popular holiday island. Now GrabCar could help to save some money. 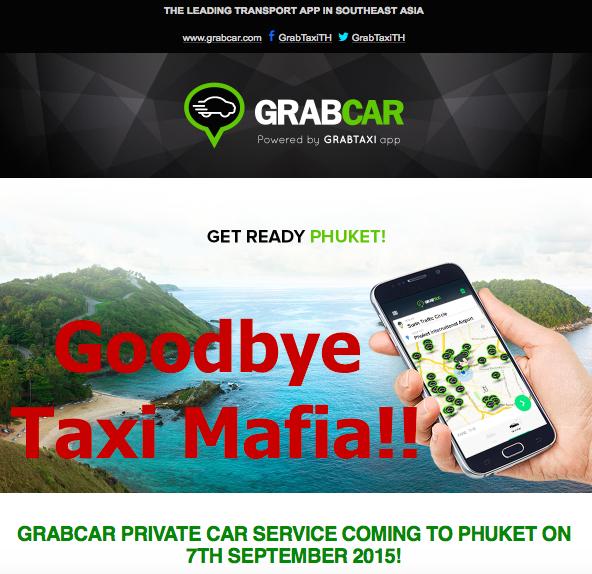 GrabCar is part of the popular GrabTaxi Application which is well established in South East Asia. GrabCar facilitates private cars to carry you while GrabTaxi uses Taxi Cabs.

The last time I have visited Phuket was in July and there were a few changes in the local taxi market. For one, you now have the option to take a metered taxi from the airport and the drivers actually use it. It is still much more expensive than what you would pay for example in Bangkok for the same distance but reasonable.

Moving around on the island or going back to the airport however is only available per fixed price in private cars or taxis with switched off meter. This also includes all transportation hailed by the hotels.

UBER had a short stint in Phuket but that seems to be over already, the application did not work when I was there last time and as far as I found online UBER Phuket is history. that’s why I’m pretty happy that GrabCar will be available from next week on, beginning September 7th 2015.

The pricing varies a little and for airport transfers there is a flat rate:

There is also a launch promotion available giving 200 THB discount for up to 5 rides:

To celebrate our upcoming launch, we have a special promo code for our loyal GrabTaxi and GrabCar users!

in the promo code field!

In July I used Phuketshuttle (a private car service which can be booked online) to go back to the airport for half the price after both the hotel and a local driver quoted me around 40 USD from the Hyatt to Phuket Airport.

I can’t tell you how much I hate price fixing for simple services such as ground transportation. If there is only taxi available and it’s a regular price you would pay anywhere else in the same country fine, I’m willing to pay whatever it costs (if you use a taxi in Los Angeles you also pay 40-50$ for 15 miles distance) but to ask for such an amount in a country like Thailand is obscene.