A flight attendant working for the regional airline ExpressJet has been suspended after refusing to serve alcohol on the flights she is working on, citing her Muslim faith prevents her from doing so. 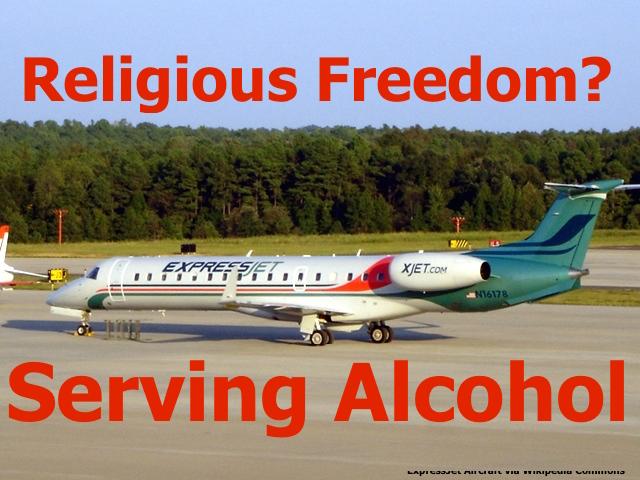 The flight attendant has subsequently filed a a discrimination complaint with the Equal Employment Opportunity Commission against ExpressJet on grounds of the airline failing to accommodate her religious beliefs.

Regional Airlines such as ExpressJet are very common in North America where they operate a variety of routes with smaller aircraft such as Embraer or Canadair Regional Jets. These flights are being operated for a number of well known carriers like American Eagle, Delta Connection and United Express. Those of you who have flown these carriers before know that the service onboard these flights is very limited and there are max 2 or sometimes even a single one flight attendant in the cabin.

Stanley [the flight attendant], 40, started working for ExpressJet nearly three years ago. About two years ago she converted to Islam. This year she learned her faith prohibits her from not only consuming alcohol but serving it, too, Masri [her lawyer] said. She approached her supervisor on June 1 and was told to work out an arrangement for someone to fulfill passenger requests for alcohol.

Let me get this straight, you convert to another religion without even knowing what it entails and what effect it might have on your job or personal life?

Another flight attendant filed a complaint against Stanley on August 2 claiming she was not fulfilling her duties by refusing to serve alcohol, Masri said. The employee complaint also said Stanley had a book with “foreign writings” and wore a headdress.

On August 25, the airline sent a letter to Stanley informing her that it was revoking its religious accommodation to exclude her from service of alcohol and placing her on administrative leave.

It seems like the airline really tried to accommodate this (in my opinion) outrageous situation as reasonable as possible but eventually one of her colleagues had enough of it and filed a formal complaint. Fair enough.

For a profession that always claims ‘We are here for your safety’ I really can’t see how it is reasonable to have one flight attendant (who represents 50% of the cabin crew) requiring her colleague to stop her service and come over to serve someone a vodka tonic. I can totally imagine how this provides a huge inconvenience for her colleagues and irritates the passengers.

Unfortunately the abuse of certain Civil Liberties Acts in the U.S. has risen sharply in the past decade. More and more people are making frivolous and outrageous claims that are far from anything a reasonable person would consider normal behavior.

Especially when it comes to traveling you can see many cases where it’s pretty obvious that people stage a disability, get some certification from a doctor and then crying foul that the airline violates the Disability Act if they don’t get their way. Same with the accommodation of so called Emotional Support Animals (Not Seeing Eye Dogs for the blind!) which many passengers use to transport their beloved pet (pretty much any animal can be declared as ESA) for free in the cabin. This is sad because it gives a bad reputation to those truly disabled passengers that depend on being accommodated and who get thrown into the same bin as these fraudsters.

As far as this matter is concerned I hope the complaint gets thrown out as being groundless or it will set a dangerous precedent for the industry, making it impossible for an airline to efficiently manage crews in an already strongly unionized environment.

This is not a matter of freedom of expression where the employer prohibits her to wear a headscarf. Her so called ‘inability to serve alcoholic beverages’ directly effects her job performance and requires her colleagues to fill in for her. This condition was imposed on the employer years after the lady had been hired. She should get her priorities in order and inform herself about details what her religion requires her to do and then decide if that’s a good fit for her or if the job she currently performs suits these requirements. If not: Resign!