Royal Ambassador is the highest status in IHG Rewards Club’s loyalty program, but is for InterContinental hotels ONLY. 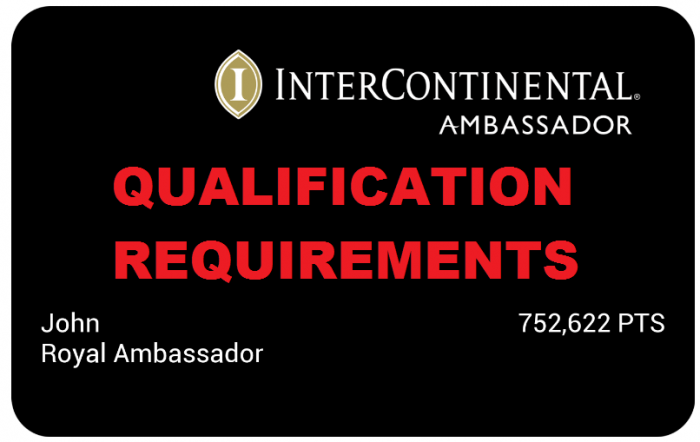 The paid loyalty program is called Ambassador and comes with benefits such as a free weekend night voucher, guaranteed 4PM check out and minimum of a one category upgrade. All Ambassador members are also members of IHG Rewards Club where they collect and redeem points.

Royal Ambassador status used to be invitation only, although IHG Rewards had widely circulated qualification criteria for years:

and they also made it public last year, updated it this year and then withdraw it entirely from the program terms and conditions.

If you send an email to Ambassador Service Center about possible Royal Ambassador qualification requirements, you probably get a reply saying that the current requirements are:

The response that I received in writing from IHG spokesperson on July 30, 2015:

My InterContinental Royal Ambassador status was just renewed a week ago and for first time for years without me having to contact the Ambassador Service Center requesting a manual review (sometimes the automated process misses nights).

I decided to do a manual count by myself. The problem is that if you access your account online the history goes back only 180 nights. You can, however, get much longer stay history (sometimes several years back) by access the IHG’s mobile website here (you can access it on laptop too).

Although I really like the Royal Ambassador status, my personal view is that the requirement of 75 paid nights is too high compared to Hilton, Hyatt and SPG requirements.

It is also unclear exactly what the requirements currently are. I requested clarification from the IHG spokesperson again last week after a reader emailed me but I haven’t heard anything back.