When a British Airways Boeing 777 aborted take off last Tuesday, passengers and crew barely escaped a catastrophe after the engine caught fire and engulfed in flames. 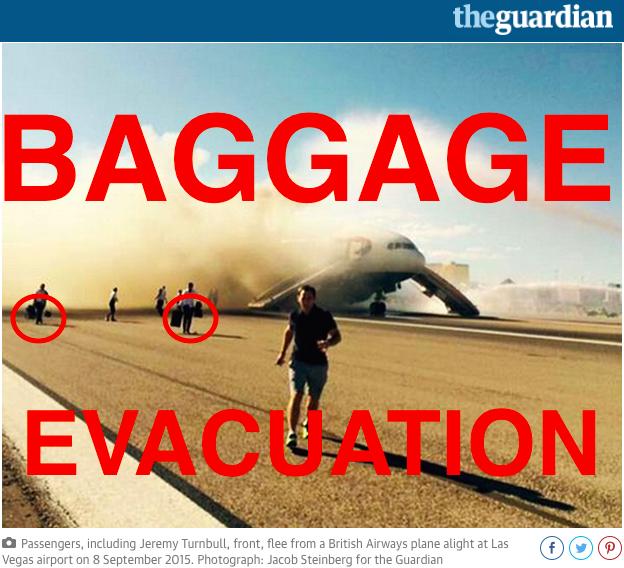 Once media reports broke and images spread, quickly the focus was not only on the cause of the accident but another detail: Passengers leaving the burning aircraft with bulky carry on bags.

John wrote about the incident that happened in Las Vegas on Tuesday (access here).

We all have seen safety videos and presentations numerous times. Many of them outline that in case of emergency personal items are to be left behind in order to ensure a speedy evacuation.

A reporter from the British newspaper The Guardian, Jacob Steinberg, was on the plane and live tweeted the situation including the picture shown above (see his Twitter here).

It can be clearly seen that a few passengers took away rather large items of hand luggage during the evacuation down the emergency slides.

TIME Magazine (access here) wrote about the matter as well with a good, very comprehensive article.

Passengers on the British Airways jet whose engine caught fire just before takeoff in Las Vegas escaped with their lives — and some with their carry-ons, as well.

While flight crews tell people to leave belongings behind in an evacuation, pilots say they seem increasingly inclined to grab whatever they brought on board. And sometimes even a selfie or two.

“A deadly slalom” is how pilot Patrick Smith described baggage on an emergency slide in a blog post. Bags also could tear the inflatable slides, block exits on board and cause other injuries in the chaos of an evacuation.

Manno noted that passengers also evacuated with belongings when a Delta Air Lines jet nearly skidded off the runway at New York’s LaGuardia Airport in March and an Asiana Airlines jet caught fire after a hard landing in San Francisco in 2013.

“We’re seeing this more and more,” said John Goglia, an aviation safety expert and former member of the National Transportation Safety Board.

Goglia believes that because air safety advances have made accidents far more survivable and injuries often less severe, more people can — and do — bring bags as they evacuate.

If you refer to the referenced Twitter account above you will see the sequence of events and that it indeed took a very long time to have personal items returned to the passengers. So even if you did everything right and left all your items behind it might prove very difficult afterwards to either receive these items back (if they can be salvaged at all) or to replace them.

This was the Emergency Information Sheet distributed in Las Vegas to effected passengers:

I would think that an airline makes arrangements for passengers to be able to check in at a hotel without a passport. In some cases though passengers have more important things like medication or other personal items in their carry on and their thoughts are tied to these items rather on other more immediate needs.

I don’t want to condemn passengers who carry out stuff despite the procedure guidelines say otherwise. In such a situation, acting rationally might prove difficult and you can’t really prepare yourself emotionally for an incident like this.

Something like a purse or a small briefcase is relatively compact in size and as long as you don’t have to pull it out of an overhead bin and obstruct other passengers from leaving I don’t see a problem with taking it with you. Large rollaboards like those seen in the image above are unreasonable and dangerous. Not only you need to take them out of the bin first but how do you get them down on the ground? Shoving them down the slide might damage the slide itself and could possibly hit a passenger at the end of it.

Keeping important personal items close to you is a good thing to remember, though maybe not always possible.