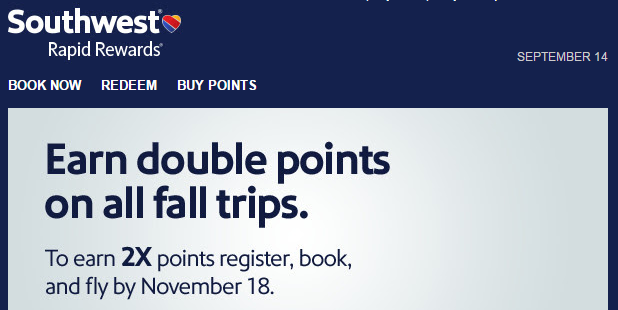 The offer is valid for flights that are both booked and flown between September 14 – November 18, 2015, and required registration.

Those that fly on Southwest this fall should register for this offer and collect the bonus Rapid Rewards points.

Only the Rapid Rewards® Member who received this email/offer from Southwest Airlines® is eligible for this promotion. Offer is nontransferable. Member must register for this promotion between September 14, 2015 and November 18, 2015, and registration must be completed prior to commencement of travel. Valid on new reservations booked within the promotional time period. Member’s flight must be booked through Southwest Airlines between September 14, 2015 and November 18, 2015 for travel between September 14, 2015 and November 18, 2015. Member’s flight must be completed between September 14, 2015 and November 18, 2015. A qualifying flight for Rapid Rewards is a one-way revenue flight booked through Southwest.com® from an origin city to a destination city, including any intermediate stops and/or connections. Rapid Rewards account number must be entered at the time of booking. Rapid Rewards earned points are calculated using base fare. Member will receive 12 bonus points per dollar spent on Business Select® Fares, ten bonus points on Anytime Fares, and six bonus points on Wanna Get Away® Fares. Bonus points are in addition to the standard flight points earned through Rapid Rewards. Bonus points will not count toward A-List, A-List Preferred, or Companion Pass qualification. Member will receive bonus points within four days after completion of entire ticket. Award, Companion Pass, Southwest Vacations® packages and reward travel do not qualify for this promotion. Changes made to this itinerary after purchase may eliminate qualification for promotion.