Iberia Plus has now launched their version of the 40% off Economy award sale between United States or Canada and Europe (read more about the British Airways version here). 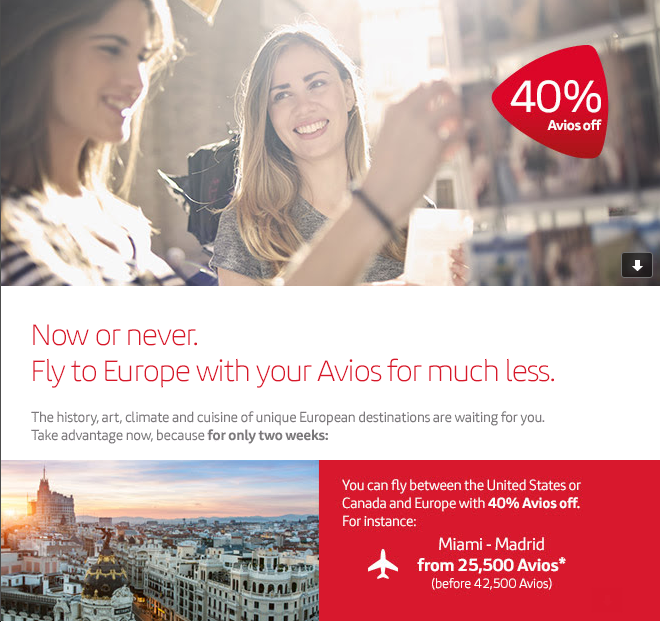 The offer is valid on British Airways, Iberia, Meridian and OpenSkies flights on the specified routes.

You can make your Iberia bookings here.

Note that your Iberia Plus account address likely need to be in the United States or Canada to bring up the discounted awards.

The flight on Iberia economy priced just right and the taxes/fees are rather reasonable unlike with BA.

This is good time to get those economy award tickets in using Iberia Blus Avios if you had been planning to use them for economy class tickets between North America and Europe.

Here are the terms and conditions of this sale:

Offer valid for use of Avios for bookings on any channel made between 14 September 2015 and 27 September 2015, inclusive, for flights between the firszt of October 2015 and 31 March 2016, inclusive, for Iberia Plus customers who are resident in the US or Canada. Valid for direct flights in using Avios on flights marketed byIberia, British Airways and Meridiana Openskies in the economy section (class X). Not valid on flights IB3600-3999, IB4XXX, IB5XXX, IB7XXX or IB8XXX. Flights LAX-MAD and BOS-MAD are only operated in summer season. In the case of LAX the last flight will be 23 October 2015 and will resume from 31 March 2016, in the case of BOS-MAD the last flight will be 23 October 2015 and will resume from23 March 2016. Flights JKF-NAP and JFK-PMO operated by IG are seasonal flights. These flights will cease operations on 23 October for flights JFK-NAP and 22 October in the case of JFK-PMO. These dates may change depending on the operating company’s operations. Offer subject to tables of use of Avios of the Iberia Plus Programme. It does not include fees or surcharges. There are no issuing costs. Not combinable with other offers in force in the same period and destination. This promotion does not apply to flights outside the above dates. For more information please go to our websitewwww.iberia.com. This promotion is personal and non transferable, valid except for typographical errors or omissions.

The routes included in the promotion are: