American Airlines was plagued by a computer issue today which halted all flights going through the carriers three hubs in Dallas, Chicago and Miami. 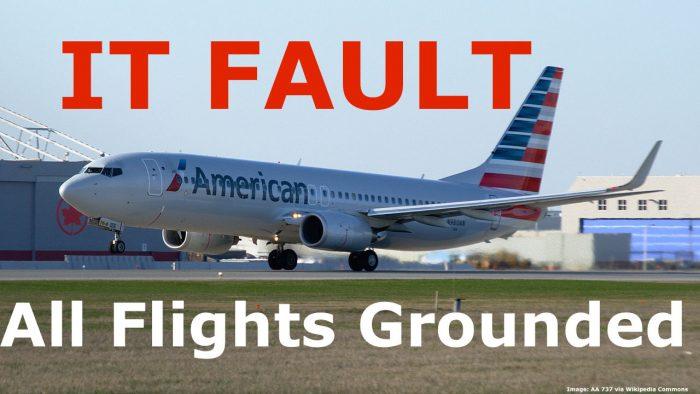 The service disruption took almost two hours and 530 flights were effected by this IT fault, disrupting passengers schedules.

It’s not a good year for U.S. airlines as it seems as far as reliable IT systems are concerned. United had two major outages this year already and American on one occasion had to ground their flights because an iPad application for designed for pilots airport navigation was not working.

CNBC reported about the matter as soon as it was resolved (access their article here).

The Federal Aviation Administration first reported the outage and said only that the cause of the ground stop was “airline issues.”

The airline also responded to customers amid the outage, but did not specify what caused the outage.

Computers at O’Hare reportedly started to come back online mid-afternoon, and only 10 departures had been delayed, WMAQ said.

Earlier, the airline told the NBC affiliate that it was working on resolving the issue and that it did not know how long it would take to resolve.

A company spokesman had told Reuters that all domestic flights departing from Dallas-Fort Worth, Chicago O’Hare and Miami had been halted.

American Airlines updated their customers on Twitter and apologized for the delays.

It is unclear what caused this outage. It doesn’t seem to be a reservations system error so passengers who missed connections could have theoretically be rebooked onto other carriers through AA’s interline agreements. I’d imagine though that most AA agents at the airport would be reluctant to do that unless you are Executive Platinum or try it at the Admirals Club.

Unforeseen delays due to IT faults are on the rise and as the passenger there is little one can do to prevent this. What I started doing a few years ago is to always complete the online check-in and generate a boarding pass if I have the chance so in case of any upcoming computer malfunctions you can at least go through security to the lounge and wait it out over there.

Dallas and Miami have quite a few international flights during the midday/afternoon time. At least for the domestic flights there is still a lot of ‘day’ left to recover.