European Union has very pro-consumer legislation when it comes delays and cancellations of flights by community carriers or airlines operating from European Union member states + Switzerland, Norway and Iceland. 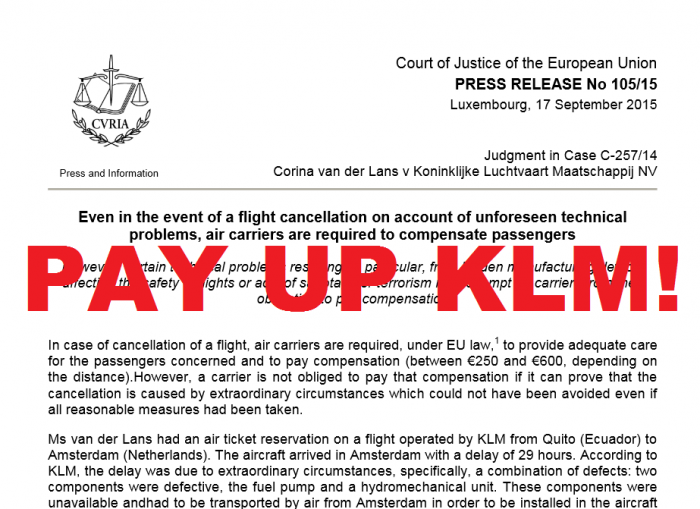 Airlines are required to pay 150 to 600 euros for delays and cancellations, rebook passengers on other airlines and provide care (hotels/meals).

You can access press release of the ruling here.

In the event of delays/cancellations the first reply that you get from the airline is usually that it was caused my mechanical and thus considered “extraordinary” circumstance.

The European Court of Justice clarified this yesterday:

Even in the event of a flight cancellation on account of unforeseen technical problems, air carriers are required to compensate passengers

However, certain technical problems resulting, in particular, from hidden manufacturing defects affecting the safety of flights or acts of sabotage or terrorism may exempt air carriers from their obligation to pay compensation

Passenger traveling from Quito to Amsterdam on KLM was delayed by 29 hours due to two mechanicals with the aircraft. KLM had flew in the replacement parts and claimed that this was extraordinary circumstance, but the court disagrees:

In today’s judgment, the Court recalls, first of all, that it follows from its case-law that technical problems may in fact constitute extraordinary circumstances. However, the circumstances surrounding the occurrence of those problems may be classified as ‘extraordinary’ only if they relate to an event which is not inherent in the normal exercise of the activity of the air carrier concerned and is beyond the actual control of that carrier on account of its nature or origin.2 The Court states that that is the case, in particular, where it is revealed by the manufacturer of the aircraft comprising the fleet of the air carrier concerned, or by a competent authority, that those aircraft, although already in service, are affected by a hidden manufacturing defect which impinges on flight safety. The same would hold for damage to aircraft caused by acts of sabotage or terrorism.

However, since the functioning of aircraft inevitably gives rise to technical problems, air carriers are confronted as a matter of course in the exercise of their activity with such problems. In that connection, technical problems which come to light during maintenance of aircraft or on account of failure to carry out such maintenance cannot constitute, in themselves, ‘extraordinary circumstances’.

Next, the Court observes it is true that a breakdown caused by the premature malfunction of certain components of an aircraft, constitutes an unexpected event. Nevertheless, such a breakdown remains intrinsically linked to the very complex operating system of the aircraft, which is operated by the air carrier in conditions, particularly meteorological conditions, which are often difficult or even extreme, it being understood moreover that no component of an aircraft lasts forever.

Therefore, in the course of the activities of an air carrier, that unexpected event is inherent in the normal exercise of an air carrier’s activity, as air carriers are confronted as a matter of course with unexpected technical problems. Furthermore, the prevention of such a breakdown or the repairs occasioned by it, including the replacement of a prematurely defective component, is not beyond the actual control of that carrier, since the latter is required to ensure the maintenance and proper functioning of the aircraft it operates for the purposes of its business.

Therefore, a technical problem cannot fall within the definition of ‘extraordinary circumstances’.

In that connection, the Court also points out that the discharge of obligations pursuant to EU law is without prejudice to air carriers’ rights to seek compensation from any person who caused the delay, such as the manufacturer of certain defective components.

Airlines are trying to do their very best at dodging valid EC 261/2004 cases by basically lying to fliers that they are not eligible for the compensation even when the case would be crystal clear. You then have to take the airline to the national enforcement body or to the small claims court.

This ruling clarifies that mechanicals are not reason to deny compensation because they are not considered extraordinary circumstance.

So, if you have had claim denied by the airline claiming “extraordinary” circumstance due to mechanical issue, contact them again with this court ruling and press for proper resolution.

Airfare of the Day [Business Class] AIR FRANCE/ALITALIA New York to Cairo from $2,398