Travelers flying into and flying out from Australia are certain to face delays in the next 10 days as the Australian Border Force is on strike. 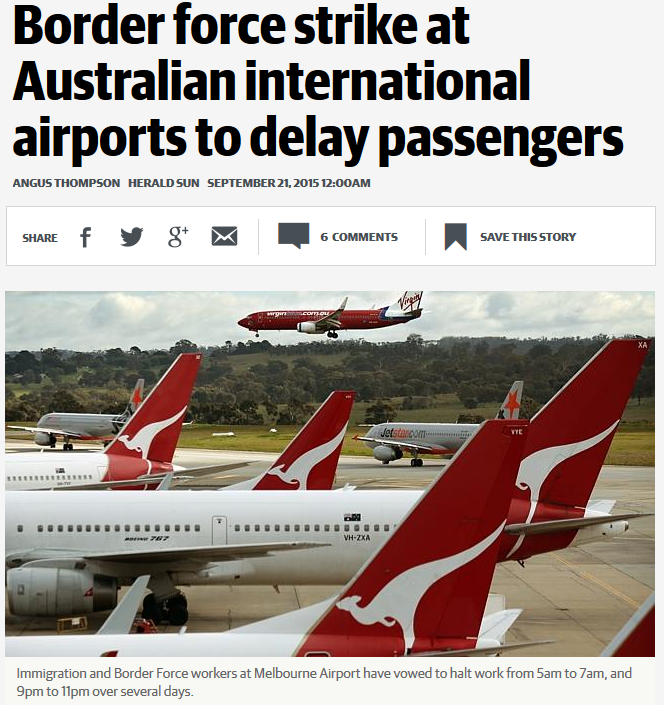 The officers are striking for two hours couple of times per day at the Sydney, Melbourne, Brisbane, Adelaide, Perth, Darwin and the Gold Coast airports over pay proposal.

You can access Sydney Morning Herald’s piece about this work action here of which below is an excerpt and on Herald Sun’s website here.

Passengers flying in and out of international airports around the country face potential delays as Border Force workers begin a 10-day strike over pay and conditions.

The Community and Public Sector Union, which represents the workers, said staff who process passengers on international flights would stop work for two hours during the morning and afternoon peak periods until September 30.

It said the government was flying in large teams of managers around the country to act as strike breakers at large expense to taxpayers.

The industrial action was against salary cuts of up to $8000 a year.

Travelers should give them extra time for connecting from international flights to domestic or from domestic to international due to immigration staff strikes over this 10 day period.

If you are on separate tickets and end up missing your flight, good luck. Those on through tickets will be rebooked and taken care by the airlines.

Hopefully this issue has been resolved by October/November when I am scheduled to fly to Sydney from Bangkok.