With the final step of the implementation of the federal ‘Real ID Act‘ in the United States, travelers with drivers licenses issued in four U.S. states might soon require another ID document if they wish to fly domestically. 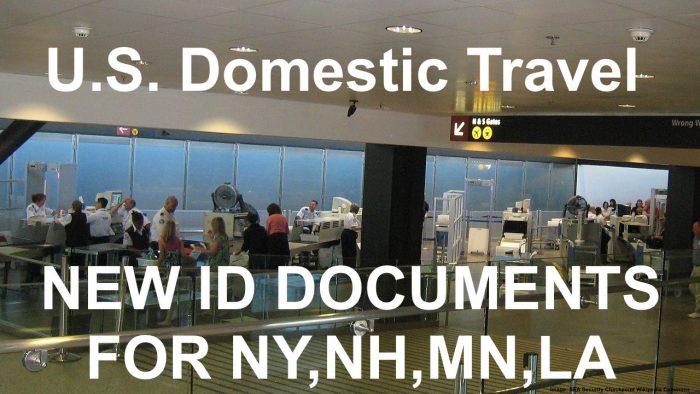 Supposedly the drivers licenses issued in the states of New York, New Hampshire, Minnesota and Louisiana do not meet a certain set of minimum security standards.

After these rules come into effect, which as per DHS is supposed to happen no sooner than 2016 (see DHS statement here) travelers with drivers licenses from these four states will require a passport or alternate form of federal ID as outlined on the TSA Website (see here).

Acceptable Identification apart from the non-excluded drivers licenses include:

Let’s assume these four state will not phase out these ‘unsuitable’ drivers licenses and replace them with something secure travelers would either have to apply for a passport and carry it around which is a bit inconvenient I guess for someone who never leaves the country or for those who do travel internationally I’d recommend enrolling for and using the Global Entry card. For those not really desiring to do either, the cheapest and most convenient option is probably the Passport Card (see details here) which is a wallet size card just like a drivers license for a fee of 55 US$.

The U.S. Passport Card can be used to enter the United States from Canada, Mexico, the Caribbean, and Bermuda at land border crossings or sea ports-of-entry and is more convenient and less expensive than a passport book.  The passport card cannot be used for international travel by air.

For those already having a valid passport it is possible to apply for the passport card by mail as outlined on the website referenced above.

There was a news article on NJ, a New Jersey based website this week (access here) giving a bit of background to the whole matter.

New York is among four states whose drivers licenses will not qualify as valid identification for boarding an aircraft under federal rules that could take effect next year, the U.S. Department of Homeland Security says.

New York, New Hampshire, Minnesota and Louisiana licenses do not meet standards established by the Homeland Security department under the latest phase of the federal Real ID Act of 2005. As it stands, residents of those states will instead have to present a valid passport or some other acceptable federal ID even to board a domestic flight

The list does not specify why the states fail to comply with the ID requirements. The Homeland Security department says on its website that it would implement the new restrictions following a review of their practicality…

There is a bit of time left so one can wait and see how this all turns out.

The situation with the ID documents in the U.S. is problematic. Some states issue photo ID’s as alternatives to drivers licenses but to obtain a license you have to be at least 16 years old in the first place. Given the size of North America and that until not too long ago you could even travel into Canada with only your drivers license it’s not surprising that many Americans do not has an international travel document such as a passport.

I saw a U.S. passport card only once because my friend was using it frequently to travel by train between Vancouver and Seattle. It is probably the most convenient option if you are forced to get such a document and don’t want to carry a passport around.

SPG 10,000 Bonus Starpoints For Staying At All Starwood Brands In 2015