The “Flyer Friendly” United Airlines was seeking volunteers to get off of their Denver to Aspen flight last week and when there were none decided to bump two passengers that turned out to be Mr. Schiller and his wife. 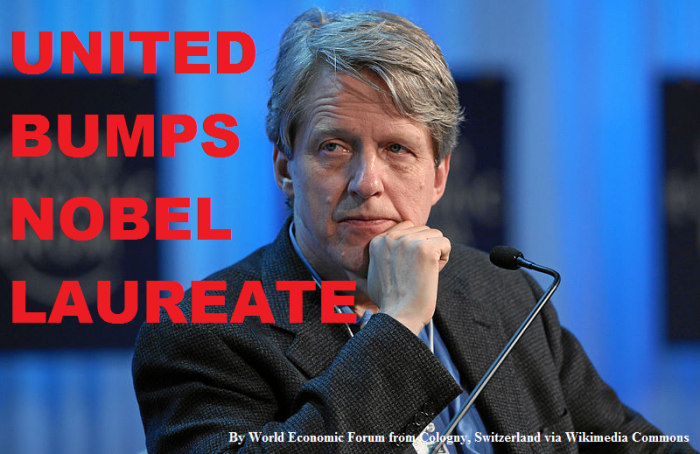 The airlines often oversell flights in anticipation that not all the passengers will show up or that there will be misconnects. When everyone turns up, however, they may have big mess on their hands.

You can read more about this on MarketWatch’s website here of which below is an excerpt:

It would have made more sense for United Airlines staff to offer a larger incentive for passengers (who did not have to be at their destination that evening) to agree to take a later flight, she adds. Virginia Shiller says the staff were only permitted to offer volunteer an amount totaling several hundred dollars, but it may not have been enough of an incentive to persuade volunteers to take a later flight. “It was totally irrational. They probably could have gotten a volunteer to take $2,700. They have these formulas. It’s like something they do in socialist countries.”

A spokeswoman for United Airlines said the company would be happy to speak to the Shillers, but could not comment on the details of this case, without knowing all the details of the flight. She said the compensation for those who are denied boarding — or, in the case of the Shillers, actually asked to leave the plane — vary according to the circumstances. When asked if the plane needed to lighten its load or whether there were elite flyers who still waiting to board the flight (and who take precedence over other travelers), the spokeswoman declined to comment

It wouldn’t surprise me if United agents are not allowed to offer cash compensation exceeding certain amount before starting randomly bumping passengers off the flight and then having to issue larger compensation as a result.

Although this is probably cash rich city pair and passengers not willing to give up their seats, why not offer at least the maximum compensation required by DOT ($1,350) for voluntarily bumps?

These oversells can happen with any other airline, they are not unique to United, but how the airline handles them matters a lot. Denver is one of United’s hubs, so one would imagine that there are competent supervisors that can handle situation such as this?