A passenger in Italy has allegedly gone to the extreme to avoid missing an Alitalia flight he was running late for. He simply called in a bomb threat! 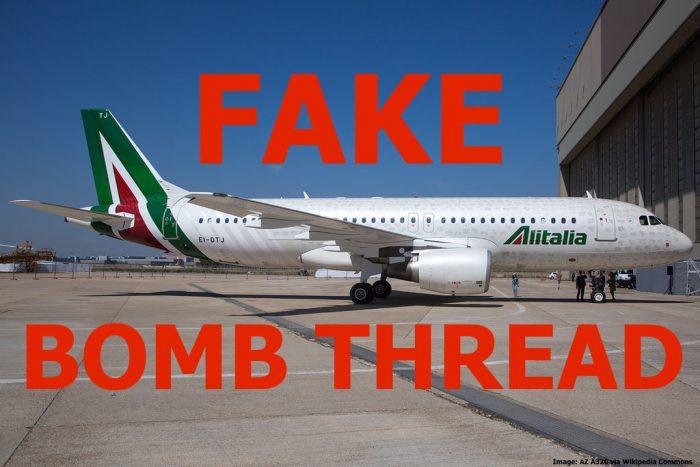 The flight from Turin to Rome was indeed brought back to the terminal and all passengers and baggage searched. For the late passenger however the journey led him to jail instead of his desired destination.

Such an insane act it either the work of someone very stupid or very desperate. I can’t make up my mind which factor weighs higher.

The story was reported in the British Daily Mail (access here).

An Italian man is facing a possible prison sentence or hefty fine after he allegedly called in a bomb threat so he wouldn’t miss his flight.

The 46-year-old passenger was running late for his flight from Turin to Rome, so he called a local police station and claimed there was a bomb on board the Alitalia plane, said police. He succeeded in his attempt to delay the flight, but he was arrested by police when he arrived at Turin Airport. …

According to a report by Italian newspaper La Stampa, the man called police and claimed he overheard two Arabic-speaking passengers say ‘they had put a bomb on board’. …

The man who allegedly called in the threat was travelling to Palermo for work, and was held overnight by police and released the following morning, La Stampa reported.

In addition to facing time in prison and a fine if convicted, the man could be added to Italy’s passenger blacklist.

The flight ended up being delayed, arriving 2.5 hours behind schedule [irony on: still in the upper performance field considering Alitalia’s usual delays].

What surprises me is how he thinks he can get away with it. Ok, no rational person who has all his marbles together would ever consider doing something like this so I don’t expect this guy to think critical about his actions but still…

Obviously a very extreme but not an isolated case because the article above also states the case back in May when a frenchman called in another bomb threat because his girlfriend was stuck in traffic.

Interesting is that Italy seems to have a flight blacklist as well. I wonder if this is only good in Italy or also within Europe, shared with other governments and their security agencies.