In the past few weeks I’ve had many flights within Asia and also to North America. This time I was determined to watch a bit over the type of food offered in lounges and on board the aircraft. 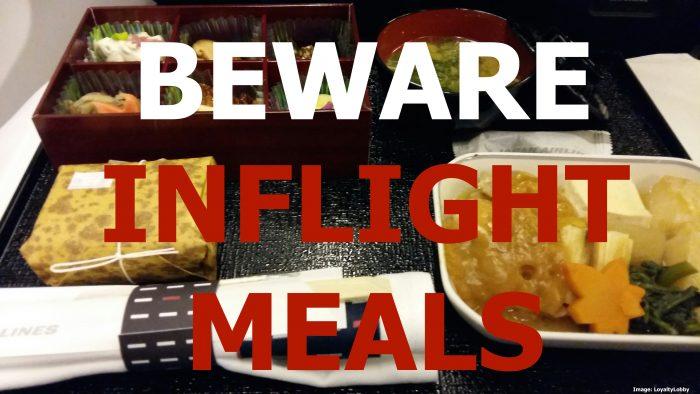 A common misconception is always coming up when I talk to people who think meals on board the plane are actually healthy or have a low calorie count. Think again!

One flight I had a few days ago on ANA to Vancouver showed something interesting on the Inflight Entertainment System. The menu of that days flight and it also showed the calorie count.

These were the meals for Economy Class. First the Japanese option.

The Japanese option was a Rice Ball Bento which included noodles, a few vegetables and a miso soup as well as something sweet. Total calorie count: 744 kcal. Not bad!

Then there was the western option.

The western meal looked greasy (the passenger sitting across from me had it) and per description it was a molten cheese topped hamburger steak with a few vegetables on the side, also a tiny salad as well as cold cheese and crackers. Calorie count: 1,090 kcal. Keep in mind, this is for the meal only, the calories for drinks obviously vary depending on what you order.

As this was an Economy Class flight for me with a 9:50pm departure time I decided to eat at the lounge in Tokyo where I had some of the fantastic Japanese Curry with Rice, Sushi and a variety of Sake. Certainly not low on calories either but I felt I had a much better dining experience and food quality.

One of the problems during the flight is that there is not much to do except eating, drinking and (if you can) sleeping. So often I find myself eating just to pass the time and to be honest I realized I have to stop doing that, especially if I fly more often again.

The 1,090 kcal for the western option meal stunned me. That is substantially more than a McDonalds Big Mac Meal (based on McDonalds Nutrition Website here). A Big Mac has 530 kcal plus 350 kcal for medium fries. Only this value doesn’t say much, there are other factors such as fat and carbohydrates but it’s an indicator that these inflight meals are often huge ‘calorie bombs’ that somehow need to be burned.

We as travelers should be mindful of the nutritional value of these meals and snack options that are being offered to us at every given opportunity.

People that find it hard to burn these calories and don’t always have the opportunity to exercise frequently during traveling might do well in skipping a meal out of the ordinary. I count myself within this group as well, hence the reason why I did not order any of the two meal choices on this flight.

Marriott inherited a well-liked Ambassador program from Starwood Preferred Guest. Despite fears it would go away, they decided to add a spend minimum and...

Indonesia Grants Automatic Visa Extension To All Visitors Who Entered The...