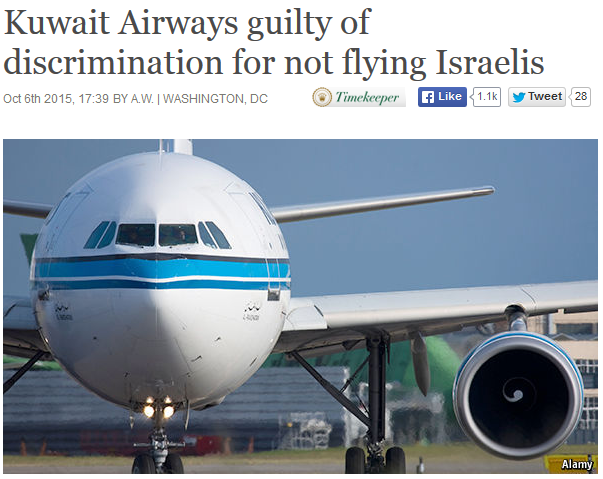 Israeli passport holders that have purchased tickets for this often competitively price segment have only found themselves refused boarding citing Kuwaiti law that prevents companies to do business with Israelis. Kuwai Airways have sometimes booked affected passengers on other services.

DOT found last week that this is basically discrimination and if the airline wishes to continue this service they must allow Israeli passport holders board as well.

You can read more about this incident on the Economist website here of which below is an excerpt:

In 2013, an Israeli citizen named Eldad Gatt tried to book a flight from New York’s John F. Kennedy International Airport to London’s Heathrow on Kuwait Airways. But the airline’s booking system didn’t allow him to purchase the ticket after he entered his Israeli passport information. That’s because Kuwaiti law prohibits its citizens from entering “into an agreement, personally or indirectly, with entities or persons residing in Israel, or with Israeli citizenship,” according to the airline.

The DoT initially decided that Kuwait Airways hadn’t unlawfully discriminated against Mr Gatt. But after the Israeli appealed that ruling, it conducted a further review and reversed its decision. In a letter to Kuwait Airways’ lawyer last week, a DoT official wrote that the airline “unreasonably discriminated against Mr. Gatt … by refusing to sell him a ticket on its flight from JFK to LHR.”

Here’s the DOT letter to the Kuwait Airways:

It is crazy for the airline to discriminate based on one passport. As far as I can tell, Emirates, Etihad and Qatar Airways do transport people traveling with Israeli passports, although these airlines don’t serve Tel Aviv.

One option for the Kuwait Airways is to drop the New York from its route network or flight direct without stopping anywhere in between.

And on a side note, one could only wish that all people in the Middle East could live in peace with each other. The conflict there has been going on as far as I can tell.