A LoyaltyLobby reader sent me a long email about a stay at the Sheraton Zurich Neues Schloss Hotel in Switzerland. 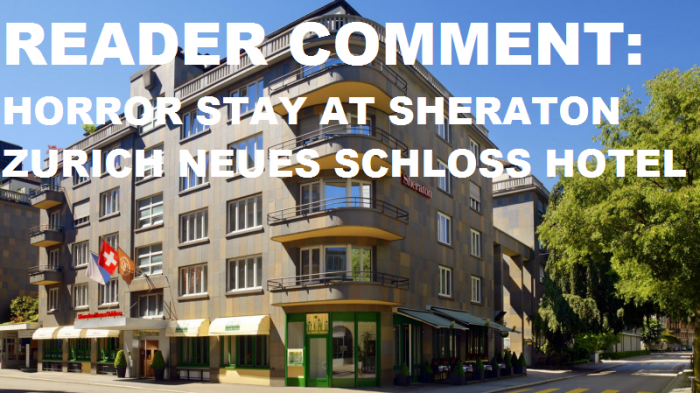 Remember that you can always email me, sent a message via Facebook or use Twitter. I’ll try to cover Reader Questions here several times a week.

Curious if other readers had similar.

We have stayed at this property since 2008.  From then to 2012, this hotel was under different management, was a small quaint downtown Luxury hotel.  Very clean, local high quality foods for breakfast, made this place a special experience.    We are Platinum 100 members for many years and this is the first time we used cash and points. This is our recent experience there.

It’s inconceivable that when using points, the service would drop off to such low levels.  We have noticed over the last 2 years, the new management wants to make an impression with high profits.  We understand the profit motive, but to be a hero to the company and disregard the guests, that is not cool.

Only on arrival were we advised there would not be an upgrade due to our 6 days stay.

However the room allocated had a very strong chemical smell.  We arrived in the evening and tried airing it out.  During the nite it caused us severe headaches.   We did not realise the danger posed on us as we were coming off a long haul flight.

The severe headaches caused us not to sleep and had to take painkillers till morning.  This hotel or any hotel in the world should never ever have been rented this room to a guests to sleep in, and they give it to Platinum 100’s and knowing a repeat guest, truly showed us how careless and callous the management is.

The hotel was nicely renovated in 2008.   However in this room the floor squeaks quite dramatically throughout the room.  Of course when one gets up to take aspirin, the floor squeaks wake the other.  No way to avoid making the cracking floor noise.

The bed bellows significantly inward which means it is probably old with such indentation of use.

We reported to manager on duty in the morning and were moved to another room.   This room was not smelly but the carpets were quite dirty, soiled and stained.  The TV system gets all screetchy and static.  Someone must come to the room get on the floor and open up the cabinet and work on all the wires to fix it.

This is a problem that has continued but the management has not bothered to solve.

Then we were able to move to a room which they call junior suite.  That room is comfortable, fresh, and doesn’t smell.

But then the housekeeping causes problems.  First, they removed the soft feather pillows which we requested and is on our record for years.   Secondly, they put on a duvet cover worn out with holes near the head sleeping area.   Thirdly, after pulling aside that duvet, we get a dirty sheet right near the pillow.   Of course this was noticed at sleeping time.   Was it on purpose for using points?

No housekeeping at 10:30 pm, so the doorman brings new linen, we change the bed ourselves.

The 2 years manager has demonstrated over the last 2 years to make cuts.  All the wonderful Swiss artisan food in the restaurant has disappeared.  This hotel does not have a lounge.

Towels used to be soft, fluffy and white.  Now they are hard, strings hanging off and that machine wrinkled press lines in the middle, certainly looks like a new supplier, probably at lower rates.

The next day we alerted the front desk to remind them about housekeeping service.   Yet on our return we again found dirty linen.  At this hotel category, it is truly unbelievable !   Once maybe, but 3 times in one stay !

On our 4th day the GM informed us that we would need to move again – this the 3rd time.  But we had to vacate for a paying guest (the GM directly told me, “they paid for it” and they were platinum.   Despite the fact that my wife fell ill that night, and despite explaining this while the GM saw how unwell she was feeling, he sent the front desk man after us demanding to vacate the room.

I said to the GM, you have no other options?   As you and I well know from extensive travels, the GM does have options, but this one will not move on anything.

We were fortunate to be able to book a short notice doctor emergency visit.   We told them we would move the room but needed to see the doctor first.

When we came to the exit we were stopped by the front desk man, Jens Uwe Orth.   He demanded to know when our room would be vacated.  We told him that we were going for a doctors appointment will be back soon within an hour.  It was enough time for them as it was only 11:30 am.

Then he angrily came from behind the desk and went towards the Mrs and rudely demanded banging his fingers on his watch for a time and stated, “We have platinums arriving today and we need to know when you will get out of the room”.   .   We were absolutely shocked.  And very, very sorry Mrs had to be treated this way by a hotel we stayed for years.    They are not hospitable nor value the guests, its only their bottom line that matters here.

This was very embarrassing and threatening indeed.   This behaviour is for street gangs, never at a Sheraton and certainly not at this Zurich downtown property.     He didn’t care about our situation, he was barking rules at us, not caring that we are already Platinum 100 this year alone, and for years.   We do know alittle how things work.

I cannot imagine what Jens would have done if I was not there to intervene.   I most certainly do not accept men’s aggressive behavior towards women.    Women travelers do suffer their difficulties when alone.   We usually travel together.

We did feel safe in this hotel before.   Maybe it was an illusion.  People have their uniforms on and it is Switzerland, but hooliganism is not acceptable.

As platinum and long term members of Starwood there should be no discrimination made between platinum members who are already in or those arriving management should really manage a property and guest not dictate.

We returned to the hotel within 11/2 hour and changed rooms.   Although we certainly made our complaint to the GM in person.  He agreed it was wrong and will teach them not to do that again on our expense?    However none of the staff involved offered an apology.  We had another 24 hours there and four times crossed the front desk man Jens, and no apology.

We requested an umbrella at the front desk from another male staff who made an off-color remark.  We mentioned this to the GM as well and he agreed it was wrong.  That man never apologized to us.

I guess we all run across the hotel manager who is trying be the hero on the numbers side and loses track of hospitality.  How much can he take away before anyone notices. Ok we lost some really nice local foods there. And was it using points that caused this?

I feel truly awful that he may have decided to cut us back and told his staff this time round and Mrs was not well.

It becomes an unsafe place for us as we cannot predict what will they do next.

We had to leave and did so the following day.  We went to a Marriott and then a Renaissance.  Both places staff saw Mrs, heard her voice and offered her something to soothe.   We know Marriott in general is not always so generous, but there are standouts in the staff.   We were touched by their kindness and value to their guests.

We certainly do not feel good about this experience, but thought to mention it for other travelers.  Have others felt slighted because of using points?

I have come to conclusion that some hotels really don’t care about their elite guests (if not all the guests) when the business is strong and that must be the case at this Sheraton hotel in Zurich.

The length of stay, however, can often negatively affect upgrades. It is difficult for some smaller hotels (this one only has 61 rooms) to commit to a suite for 6 nights when, at least theoretically, they could be able to sell it for some nights.

If you were given a suite later during your stay and the management didn’t make it conditional (you need to move if we need this), it is really bad move from their part and purely for $$$’s.

You really need to open a case with Starwood’s Corporate Customer Care and leave appropriate feedback of your stay also on TripAdvisor. Starwood should gve significant if not all the Starpoints back that you used for this Cash + Points reservation.

Personally, I would have moved to another hotel immediately after the problems started and when you had issue with the management. If the management shows that they don’t care, it will spread to the entire organization.

Reader Question: Banned Entering & Flight Operates? Can I get A Refund?

There is often a range of speculation how much hotels get reimbursed from their respective loyalty programs when a member uses the saved up...

Airfare of the Day [Business Class] FINNAIR Singapore to Edinburgh from...

IHG Defaulting On Payments – May Lose 103 Hotels In North...