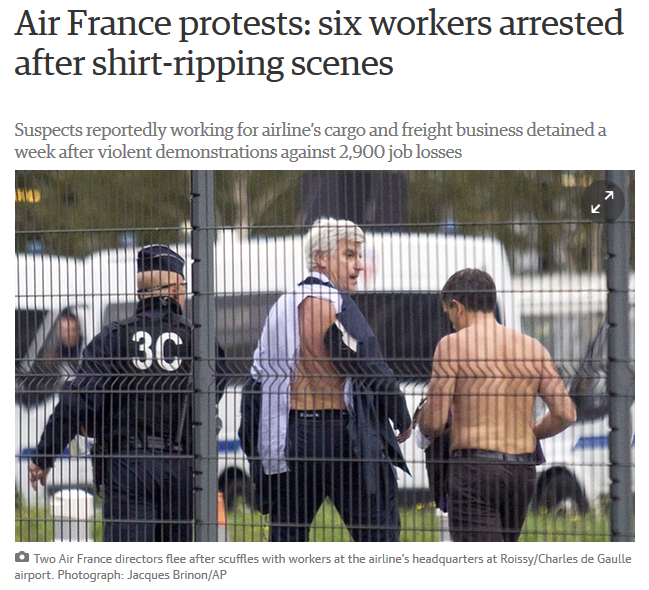 Now, six Air France employees were arrested yesterday that were identified on the photos and video coverage of the incident.

You can read more about these arrests on the Guardian’s website here of which below is an excerpt:

Six Air France workers have been arrested on suspicion of attacking company directors, a week after staff ripped off executives’ shirts in a protest over job cuts.

Police arrived at the homes of suspects on Monday morning after allegedly identifying them from footage of airline staff forcing their way into a directors’ meeting where 2, 900 redundancies were being announced.

Police and judicial sources said five Air France staff, all members of the CGT union, were arrested at their homes in the Paris region and would be held in custody in the capital.

The CGT union said the arrests were designed to frighten and intimidate staff. “It’s not going to help matters,” Fauverte told Europe 1. “I think there’ll be other staff belonging to other unions accused, and all this will just keep the pot boiling.”

It is worrisome if the apparently militant Air France CGT union doesn’t see any issues how the employees behaved.

I hope that these employees will be prosecuted and sentenced. There is no excuse for violence, however strongly employees may feel about the coming lay offs.