Lufthansa Miles & More is making small cuts for their members again while fighting a problem that is common among all frequent flyer programs: Liabilities for stored miles. 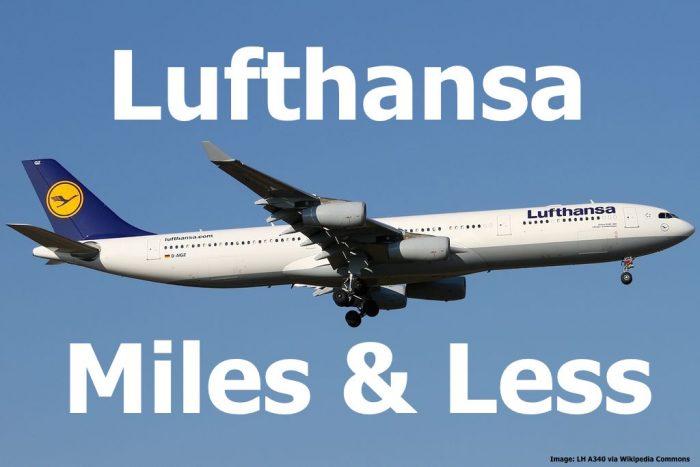 Lufthansa has been notorious for adjusting their program and cutting back on benefits and earning ratio for their members over the years.

While some of these cutback could be seen as justified and going with the time, others were harsh and created bad blood within the pool of Lufthansa’s most loyal customers.

Today the German newspaper Handelsblatt had an article about the most recent adjustments of Miles&More, the importance of ‘retail sector’ miles and how it resonates with the customers. You can access the article here.

But frequent fliers feel they are getting less than before. Business travelers find that upgrades are harder to get, collecting miles is becoming more expensive, redeeming them is a headache, access to the lounge is limited and there are many hidden costs, like rebooking and extra luggage charges.

Business travelers are frequently forced to choose this for short flights. Until recently, Senators and Hons have been able to reserve front row seats in economy and take an extra piece of luggage without incurring additional charges. The perk was abolished on October 1.

The next downgrade to the program will occur on January 1, when one of the most popular ways to collect miles will be cut back significantly. Previously, each euro spent with a Miles & More credit card resulted in a mile being awarded. Now, a euro will deliver just a half-mile.

To be fair, British Airways started this trend with their ‘Hand Baggage Only’ fares which don’t include any checked baggage or seat reservations, not even for Gold Members. Lufthansa is merely following up on this initiative. Exempting fares from the Star Alliance Gold benefit of the extra baggage piece is not a very nice move though.

The cutback on the credit card is a nasty one. Officially they say that this is based on a new EU law that credit cards used for business purpose have to differentiate themselves from cards issued to consumers in private capacity. Now, there would have been countless ways in how to create sufficient differences to satisfy this regulation. But cutting the amount of mileage in half is going to cost them customers. The credit card is free for Senators and HON Circle members, beyond that it ranges between 62-100 EUR a year in annual fee. Frequent travelers who are serious about collecting points and have a medium to high spend will shift to American Express with Membership Rewards.

Airlines have good reason to treat frequent flyers well. Customer loyalty programs long have been significant profit centers and are a constant source of sales growth. The rates of return are far above those flying without being in a program.

Coveted miles soon became a kind of second currency, as third parties partnered with airlines, car rentals, hotels or magazine publishers, for example, to win the loyalty of the customers. They buy bonus points from the airlines, paying anywhere from €1.2 up to €2 per mile. Fashion designer Ralph Lauren offers frequent flier miles as part of his marketing strategy. So do Deutsche Telekom and the newspapers Die Welt and Handelsblatt.

That is an error, it’s meant to say 1.2-2 CENT per mile. Anyway, these retail miles have become a cash cow for these loyalty programs. At the same time it provides a problematic perspective on the term ‘loyalty program’. If someone earns 10,000 Miles for a newspaper subscription at 130 EUR but much less for a business class round trip between Frankfurt and New York in Z or P (Business Saver) class then this irritates the customers. Especially in times where one earns 125 miles for an Economy Saver flight within Germany.

Are airlines like Lufthansa ruining their strongest business by overstepping their bounds?

The customer loyalty business has paid off handsomely for airlines. They tie up little capital and sales from sold or flown miles are offset by minor costs. Often, customers let miles lapse completely. It’s estimated up to 20 percent of miles are never redeemed, which translates into sales without costs. Yet if accumulated miles are flown, additional costs to airlines are relatively small. Machines, route networks and crews are available regardless.

At Lufthansa, 27 million people collect frequent flier miles. The DAX-listed company reveals little about the profitability of the program, but the Miles & More generated profits of €87 million in 2014.

No matter how much airlines profit from miles programs, it doesn’t appear to be enough for their accountants. Again and again, for example, Lufthansa has raised restrictions on access to its lounges, which are pricey to operate.

That’s a bit simplistic. While awards booked on short notice certainly fills up unsold capacities, awards that are booked in advance can very well occupy a seat which could otherwise have been sold for cash. I have flown many times on award tickets when flights eventually were oversold and the airline had to offer incentives to passengers to get bumped. In general however I think that Lufthansa / Miles&More makes handsome profits with their awards given the high YQ (fuel surcharges) that can reach up to 700 EUR for a First Class round trip.

For Economy tickets it’s not unusual that given all of the factors award tickets can end up being more expensive than booking the cheapest available.

Despite of their profitability, the frequent flier programs have become too much for some airlines offering them. Lufthansa, for example, launched its program in 1993. By 2014, customers already had collected 209 billion miles. Lufthansa built up a reserve of €1.7 billion, meaning 0.8 cent per mile. The news channel, CNBC, estimates 20 trillion unused miles are circulating in the industry worldwide.

So, airlines do everything in their power not to let customer accounts grow more. Since January 2014, Lufthansa has been coupling the miles more closely to the ticket value. Anyone flying with the cheap Economy Class to New York now gets credit for only 25 percent of the miles flown. British Airways followed suit in April 2015 with a similar step.

The airlines need to record all these miles all liabilities on their balance sheet. As outlines in the article this constitutes a heavy burden that increases with the ever growing mileage balances of the members. 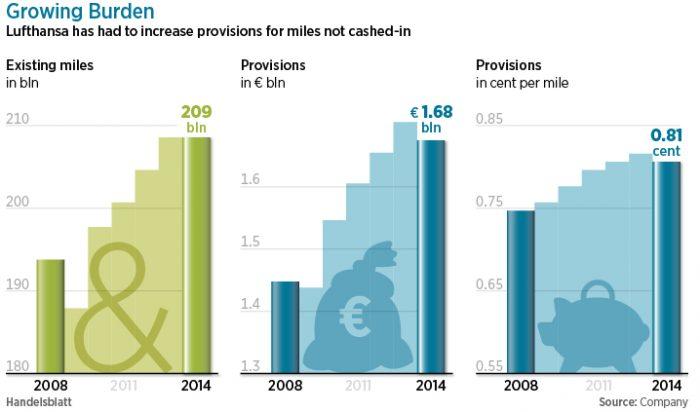 The question is, how far can Lufthansa take it in the attempt to limit earnings and squeeze additional miles for redemptions out of their members before their best customers revolt?

The Lufthansa Miles & More program has become increasingly difficult to understand for the average customer. Unless you are really deep in the topic Miles & More or you have to rely on the rather sparse publications the program updates every few years or even months.

People are crying for years over the one sided ‘enhancements’ of Lufthansa’s once popular frequent flier program. Lufthansa still has more or less a monopoly in Germany as far as the airline business is concerned. I don’t take Air Berlin all too serious as competition, especially for frequent fliers. Yet, Air Berlin is offering Status Matches for Lufthansa customers and the credit card cutbacks will certainly cost them customers. The question is, will it hurt Lufthansa or will they once again scrape by unharmed?