Alitalia MilleMiglia has launched a new promotion for up to quintuple miles on Alitalia/Airberlin/Niki flights. 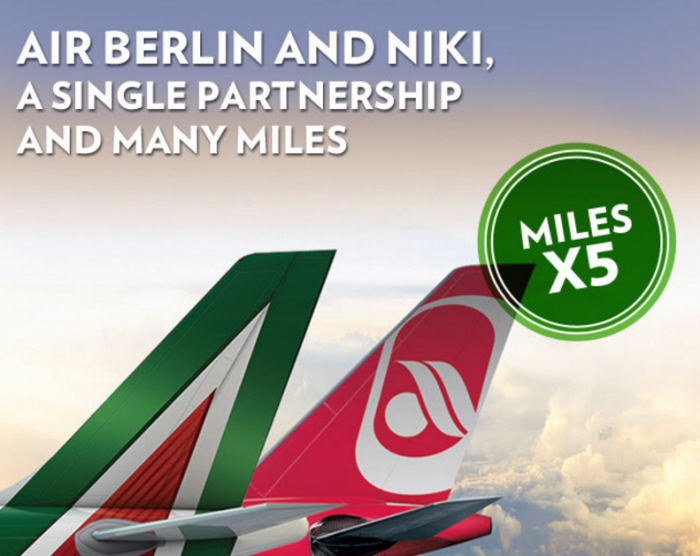 Here’s how the bonus miles stack up:

The terms and conditions of this promotion are unclear. The offer is valid on specific Alitalia, Airberlin and Niki routes, but none of them are listed beyond the one on the example. Good bonus miles offer for those that can take advantage of it.

You may wonder why Alitalia, which is SkyTeam member, would give bonus miles for Airberlin, which is part of Oneworld, and Niki flights? The keyword here is Etihad that owns minority share of both airlines (and keeps the float).

2. The miles earned are multiplied in accordance with the following table:

3. The following flights are excluded from the initiative: a) award flights; b) charter flights; c) flights taken by children registered in the MilleMiglia Kids Program.

4. To receive the bonus, the flights must be taken before December 15, 2015 and registered in the Alitalia systems before January 15, 2016.

5. The bonus miles will be credited to Member’s accounts at the end of the promotion, before January 31, 2016.

6. At the end of the promotion, the number of valid flights for the initiative will be counted and the corresponding multiplier will be used to credit the additional miles.

7. The bonus miles credited with the promotion do not allow Members to join or renew their membership of the Exclusive Clubs.