The Sheraton Wall Center in Vancouver, Canada where I stayed earlier this month is the next patient at the Compensation Clinic today. 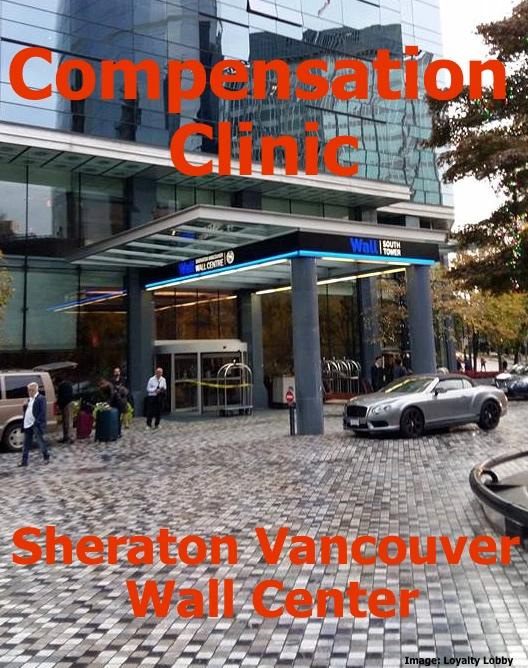 I had two stays at this property within one week of which I cancelled the first one at Check-In and moved to another hotel.

Over the years I stayed at quite a few of the Downtown Vancouver hotels, certainly all of the chain ones. Earlier this month I stayed in the city again and had booked the Sheraton Wall Center for two one night stays within the same week. The hotel actually has two towers, the large and recently renovated North Tower as well as the older South Tower that also has the Executive Lounge. Both towers have a reception area where you can check-in. The taxi let me out at the street entrance of the North Tower on Hornby St from where an escalator brings you to the main lobby.

The lower entrance has no bell staff available as well as limited signage. This trip I had 3 suitcases with work materials so moving everything up was a bit of a challenge. Arrived at the lobby there was only one associate working the check-in, three positions incl the Platinum Check-In were not manned. The line of people was at least 14 people deep.

To my question if this is the only check-in I was told I could also check-in at the South Tower, yet there is no Bell Staff available at the front desk either. Already not in the best mood I moved everything over to the second tower by myself through the rain. Arriving there 3 associates were sitting bored by the front desk. I asked why there is one lady working 15 people alone in the other tower while three people are sitting idle here. One associate was sent over afterwards. Then I was told my room is actually located in the other tower  which I declined since I was in no mood to move everything again. A standard room was assigned to me in the south tower afterwards, I asked to see it and it smelled horrible. Overall it was one of the worst rooms I’ve received from a Starwood hotel for some time. I decided to cancel the reservation on the spot and go to the Hyatt Regency Vancouver instead.

At this time I did not request any compensation and simply told the manager that I would be back later in the week and directly check-in at the North Tower. I was promised the hotel would work on the staffing situation and keep the Platinum Check-In manned by an associate as well. Fair enough.

Coming back the second time, absolutely NOTHING has improved. No bell staff, one person at the front desk, Platinum Counter not manned. I waited in front of it to see how long it takes. After 11 minutes the one lady working asked if she can help me next. I said this is not necessary but I would like to have a chat with the manager I met on Monday who got called over.

The conversation turned the obvious way that the hotel doesn’t keep it’s promises and the operations there are an absolute joke. I was then checked in and a compensation of 2,000 Starpoints was agreed upon.

The points credited about 10 days after my stay. I was also promised that the hotel could prepare an express check-in for me in the future (however that is supposed to work I’d really love to see – brace yourselves!).

Sometimes it’s the best to just pack up and go to another property if things start the wrong way. The North Tower Room (not a suite) I received on the second stay was really nice but the operations at the hotel are really bad.

How difficult is it to staff the check-in properly during peak time and in general? The person who is responsible for the staff roster should rethink whatever strategy is in play here. I really tried to be nice the first time and just cancelled and left. But after failing the second time it’s necessary to make the hotel pay in some way and to voice the disappointment in a strong way.