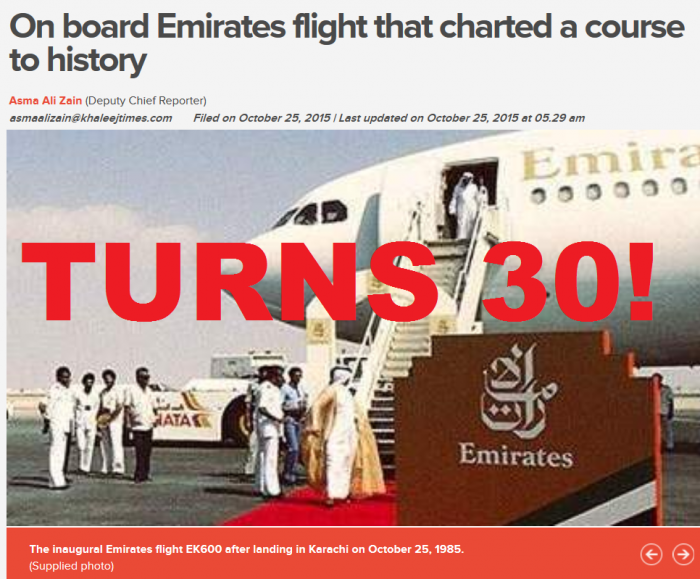 The first flight was EK600 from Dubai to Karachi and the flight number has stayed the same.

It was mid morning on October 25, 1985, and it was the day Emirates flight EK600 was due to take off on its inaugural flight at 11.45am from the Dubai International Airport to Karachi.

Al Zarouni was among the 133 passengers who flew Emirates when it was just a fledging airline that the Pakistan International Airlines (PIA) helped set up. “It was a lively flight and was full,” he says, trying to recall the finer details. “I don’t remember that much since I was too excited, and also because it was 30 years ago.

“There was a mix of nationalities but several Emiratis flew to Karachi and back again to Dubai on the same day just to support the airline and also for the reason that they were as excited as I was,” Al Zarouni says.

Emirates was conceived in March 1985 after Gulf Air began to cut back its services to Dubai. It was required to operate independent of government subsidies. Emirates leased a new Boeing 737-300 and an Airbus 300B4-200 from the PIA, according to Wikipedia.

It is difficult to believe that the Gulf Air was the original airline for the Gulf States considering what Emirates, Etihad and Qatar Airways have all done recently (eaten Gulf Air alive).

It is truly remarkable how far fast not just Emirates but Etihad and Qatar Airways have all grown the recent past. It is obvious that they cannot keep growing at the same speed considering their overall size and ever increasing push back from European and American legacy airlines.

I will be toasting for this achievement next Thursday night on Emirates flight from Bangkok to Sydney!