Starwood Hotels & Resorts have been a take over target for the most part of this year after the CEO was ousted (or left before thrown out) back in February. 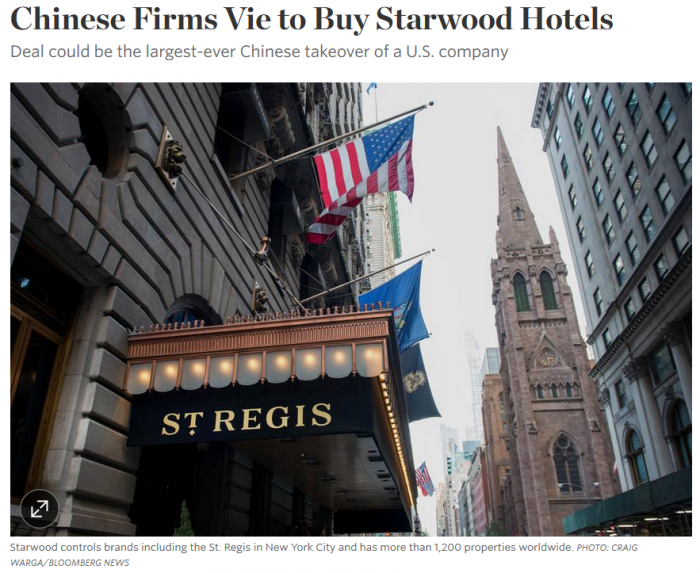 There have been rumors IHG and Wyndham among others being interested taking over Starwood. Now, however, WSJ is reporting that three separate Chinese companies have shown interest and Beijing is trying to make sure that only one bids for the entity (and not competing for each other driving the price higher).

You can access the WSJ piece here of which below is an excerpt:

At least three big Chinese companies are competing to win Beijing’s approval to bid for Starwood Hotels & Resorts Worldwide Inc., according to people with knowledge of the discussions, setting the stage for what could be the largest-ever Chinese takeover of a U.S. company.

Lodging giant Shanghai Jin Jiang International Hotels (Group) Co., along with HNA Group, parent of Hainan Airlines Co. and sovereign wealth fund China Investment Corp., each has presented a separate proposal to the Chinese government over the past two months, these people said.

Given the potential size of the deal, the Chinese government wants only one domestic company to make a bid, the people said, so that Chinese companies don’t drive up the price by bidding against one another. Beijing is expected in the next few weeks to make its selection.

Wonder how many developer is not considering one of the Starwood brands right now due to the uncertainty around the company compared to Hiltons and Marriotts of the world?

I just hope that Starwood gets its house in order and, if someone ends up acquiring the company that appears inevitable at the moment, it would find a right home.