Passengers were amazed yesterday when they saw what special passenger is going to have a seat (well, lay in front of the seat) in First Class on an American Airlines flight to Denver. 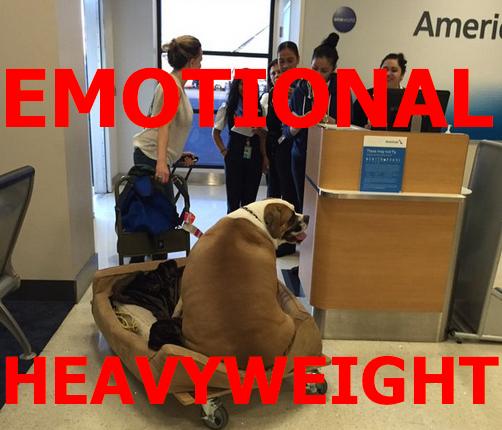 The dog as it turned out was brought on board under the rules of Emotional Support Animals which allows passengers with a disability to be accompanied by their pets.

Emotional Support Animals are the subject of big controversy as many passengers abuse this rule to carry their pets free of charge under protection of a supposed disability. As long as they have a certification for it that is.

The image of the voluptuous passenger has been uploaded on Twitter and since then shares a few thousand times all over the internet: 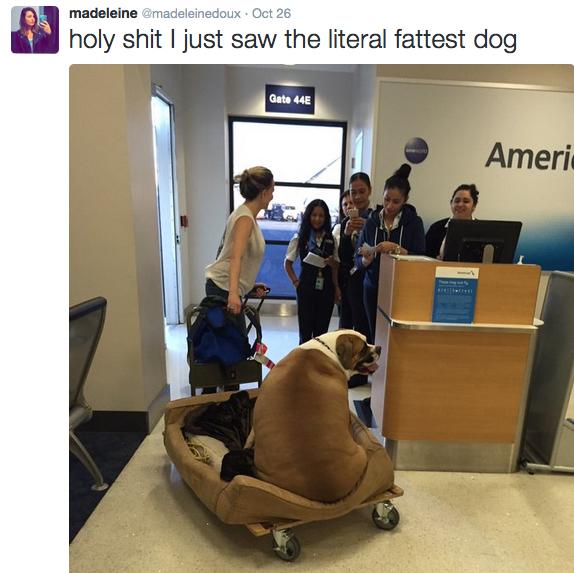 The news report on the website Mashable (access here) suggests that the owner of the dog ‘might’ have purchased two tickets for this trip. One for herself and one for the pooch.

Mashable has learned that the dog’s name is Hank and he belongs to Kari Whitman, an interior designer who founded Ace of Hearts Dog Rescue in Beverly Hills, California. Hank is Whitman’s support animal and, due to an illness, can only move with the aid of a cart, which explains his weight. We hope Hank enjoys many more relaxing flights in first class. …

This picture of a very large dog being wheeled toward an LAX boarding desk deserves to be named 2015’s best nature photograph.

This website (see here) of the National Service Animal Registry outlines how simple it is to register your pet (any pet!) as an Emotional Support Animal:

Step 1: The first step is for you to confirm you have some type of emotional or psychological disability. You will do this on the next page, once you continue from here.

Step 2: Then qualify your animal as manageable in public using the NSAR Public Access Test.

I guess we can chalk these cases up as ‘Curiosities from the United States’ which wouldn’t fly almost anywhere else in the world (all pun intended).

While I see the point for seeing eye dogs who help the blind and are specially trained the classification as Emotional Support Animal for anyone with a mental disability whose ‘animal is manageable in public’ goes a bit too far. Air travel is also very stressful for them on top of that.

What do you think, should this be allowed or are some passengers taking it too far?