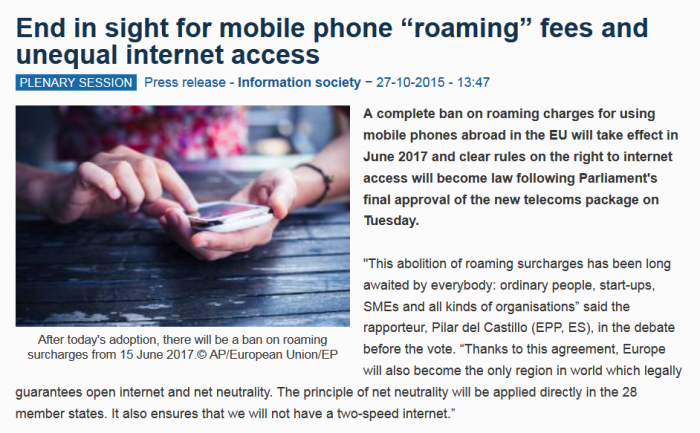 The union will also lower the maximum roaming charges from April 30, 2016 onward before the free roaming will take place the following year.

A complete ban on roaming charges for using mobile phones abroad in the EU will take effect in June 2017 and clear rules on the right to internet access will become law following Parliament’s final approval of the new telecoms package on Tuesday.

“This abolition of roaming surcharges has been long awaited by everybody: ordinary people, start-ups, SMEs and all kinds of organisations” said the rapporteur, Pilar del Castillo (EPP, ES), in the debate before the vote. “Thanks to this agreement, Europe will also become the only region in world which legally guarantees open internet and net neutrality. The principle of net neutrality will be applied directly in the 28 member states. It also ensures that we will not have a two-speed internet.”

By not accepting any amendments to the Council’s position in first reading, MEPs adopted the new law.

Roaming fees for calling, sending text messages and using the mobile internet abroad in the EU (and in EEA countries) will be banned from 15 June 2017.

From 30 April 2016 roaming surcharges (added to the price paid at home) must not exceed:

The cap on charges for incoming voice calls will be determined later this year and is expected to be considerably lower than for outgoing calls.

To protect the industry against abuses such as “permanent roaming”, operators could in certain circumstances be allowed to charge a small fee, lower than current caps, according to a “fair use” policy. The exact details for this will be defined by the  Commission and telecoms regulators.

The new law will oblige firms offering internet access to treat all traffic equally, i.e. not to block or slow delivery of content, applications or services from selected senders or to selected receivers, unless this is necessary to obey court orders, comply with laws, prevent network congestion or combat cyber-attacks. If such traffic management measures are needed, they will have to be “transparent, non-discriminatory and proportionate” and may not last for longer than necessary.

An operator will nonetheless be able to offer specialized services (such as the improved internet quality needed for certain services), but only on condition that this does not have an impact on general internet quality.

MEPs ensured that internet providers will have to give users who are about to sign fixed or mobile internet contracts a clear explanation of what download and upload speeds (compared to the advertised speed) they can usually expect. Any significant discrepancy that is continuous or occurs regularly will trigger a right to remedies such as terminating the contract or getting compensation. The national regulatory authorities will be responsible for verifying whether the difference is a breach of contract or not.

When I was traveling around Europe this summer and didn’t want to pay the data roaming charges on my Finnish mobile numbers, I ended up buying a local sim card for mainly data access in 10+ countries (UK, Portugal, Spain, Italy, Czech Republic, Netherlands, Belgium + all the Balkan ones). It is not a huge ordeal but you end up wasting time and some cash to buy a local sim and subscribing to a right package.

Remember the times when the US was not considered a single market and the telcos were charging roaming charges when you used your cell phone outside of your home area/state? This is basically still the deal in most of the Europe, although some operators are offering free roaming in limited number of countries.

This law was supposed to already be in place but telecommunications lobby was able to delay it by couple of years.

The roaming charges that take place next year will lower the roaming data price to max of 5 euros per 100 megabytes that will make unlikely that I will continue the habit of buying a local card for every country that I’ll visit.