A female Economy Class passenger who got sick during her Air Berlin flight and rushed to the Business Class toilet was afterwards confronted by the crew and a dispute arose which left the women handcuffed. 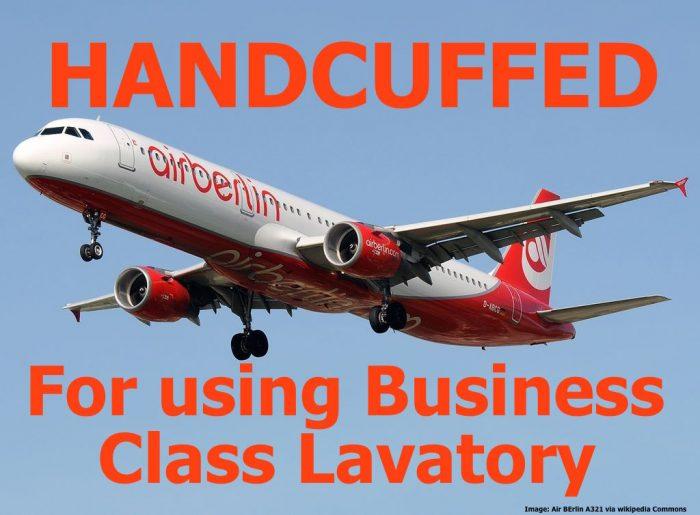 The lady was subdued after allegedly becoming confrontational and aggressive towards the crew. The cockpit crew decided to divert the flight to a remote airport in Turkey and drop the passenger off.

This incident took place on an Air Berlin flight from Vienna to Abu Dhabi, operated as Air NIKI.

It was reported in The Daily Mail (access here) that things heated up pretty quickly with both the 50 year old Slovakian passenger and the crew having a good part in escalating the situation.

A 50-year-old passenger was allegedly removed from a plane that was forced to make an emergency landing after she used the business class toilet to be sick.

Edita Kmetova from Slovakia was flying with Air Berlin from Vienna to Abu Dhabi when she felt unwell. After she claimed the economy toilet was occupied, she made her way to the one in business class one.

So far so good… this happens multiple times on every flight. I think we all have experienced that before and sometimes it’s just people who don’t know that they aren’t supposed to use any lavatory on the aircraft.

On exiting the toilet, she was confronted by cabin crew, angry passengers, and one of the captains, reports the Daily Sabah, where she was handcuffed after an argument ensued.

The pilot then took the decision to make an emergency landing into Erzurum Airport in Turkey.

Speaking to BGN News, Kmetova said: ‘During the flight, I suddenly got nauseous and rushed to the lavatories. First the passengers interfered, then the flight personnel and they argued with me, and eventually they handcuffed me.

‘They then abandoned me in Erzurum, a place I could not even find on a map if I tried. I was left all alone. At that point, I broke down into tears.’

Something must be missing here because a flight diversion is costly for the airline and considering the flight went to Abu Dhabi where many passengers must have connected to Etihad codeshare flights I bet some people missed their connections due to this.

Air Berlin accounts for the situation as follows:

However a spokesperson for Air Berlin told MailOnline Travel: After a passenger became disruptive on NIKI flight HG7086 from Vienna to Abu Dhabi , the crew did everything possible to calm the guest and ensure the safety on board.

‘Due to the passenger’s aggressive behaviour towards the crew and other travellers, however, it was not possible to continue with the flight as planned.  ‘As Air Berlin places a great deal of importance on in-flight safety, the pilots decided to make an unscheduled stop at Erzurum in Turkey, where the passenger was handed over to the police.

‘The flight was then able to continue and arrived in Abu Dhabi two hours later than scheduled. We regret the inconvenience caused to passengers on this NIKI flight.’

Air Berlin claim that all the economy toilets were available, and that Ms Kmetova was told in a ‘friendly’ manner by staff that she was not supposed to use the business class cubicle. The airline said that Kmetova reacted in a very aggressive manner, and began to shout, scream, kick and try to bite staff, as well as clash with fellow passengers.

Without saying it really happened that way, I can well imagine how the situation went down. The crew approached the passenger berating her about using the Business Class toilet paired with a good lack of empathy about the passengers well being. The lady felt annoyed by that and things got out of hand.

The airport night manager who handled the situation on the ground described on a Facebook post what he was confronted with:

He has described how he was left ‘upset’ by what had happened to her.

‘The business class toilet is used by a few people while the economy class serves almost 200, when she used it, things got out of hand, he said.

‘When we were contacted, we thought something serious had happened. When I approached her I saw an elderly woman crying and she was handcuffed. ‘I had her handcuffs removed and escorted her out of the plane.’

It’s always hard to judge a situation when you haven’t been there yourself. I find it hard to reason why it took the manager of a small Turkish airport to dissolve such a difficult situation.

To be honest I don’t believe the PR bla bla of Air Berlin for a minute. Things certainly got out of hand one way or the other but a crew is trained to deal with the matter appropriately. The woman for sure didn’t leave the Business Class toilet like a raging valkyrie. The actions of the crew must have triggered that and then they failed to calm her down again.