Reader Question: What Happens To SPG Platinum Benefits If Starwood Is Sold?

There has been quite a bit of news surrounding the sale of Starwood lately. First it was rumoured that the company could be sold to the Chinese (read more here) and then that the Hyatt would be making a bid (read more here). 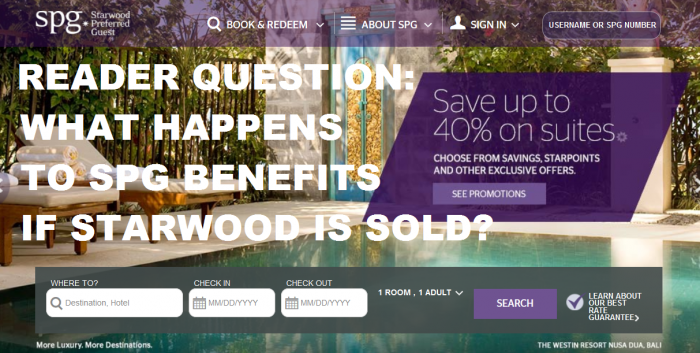 A LoyaltyLobby reader sent me an email about what would happen to the SPG program and Platinum/lifetime Platinum benefits in case Hyatt would be the acquirer.

Here’s copy of the email from Bob:

Starwood is about to sell all its assets to Hyatt. Expected to be announced next few days.

What will this mean for maintaining SPG (and especially Platinum) unique benefits including suite upgrades, multipliers of points, classifications of hotels, etc– will the programs be blended or will Hyatt’s program trump it.  Hopefully the Starwood program maintains for SPG members…   Will someone (ie me) who has 9 years and only one left for obtaining lifetime Platinum still be able to get it and then keep it? And will Westin/Sheraton/W/Meridien/Aloft/Four Points/St. Regis/Luxury etc.keep their branding?  Can you ask and find out and inform us?

The pending sale has been a big headlined deal in world economic stories including Financial times, Bloomberg, etc. But the  SPG program benefits transfer options have barely been scratched. And it is a huge deal.

There are basically three scenarios that could happen:

2. A private equity shop acquires it and takes it private just like what happened to Hilton (now public again).

3. Another hotel company buys it whether it will be the Chinese, Hyatt or someone else.

If Hyatt or any other hotel company decides to purchase Starwood, the closing would probably take a year during which they would operate as separate companies (no sharing of information etc) and another year before anything would happen to the loyalty program.

In the grand scheme of things, integrating the various brands from Hyatt and Starwood (keeping the owners happy as well) is far more important than loyalty program integration. They could offer status level matching between programs easily within a few months like what happened with UA/CO.

Starwood and SPG are much bigger than Hyatt and Gold Passport. Obviously they would become one program at some point. Maybe it would be called Gold Passport or SPG or they could always come up with totally new name as well. The acquirer ought to keep the loyalty program members happy.

Gold Passport and SPG are not that different of programs. SPG Platinum members are eligible for space available upgrades to suites while Gold Passport Diamond members receive four suite upgrades yearly that can be used for up to seven nights each (better than SPG 50 Suite Night Awards).

My suite upgrade percentage with both SPG and Hyatt is quite high, although some Hyatt properties go by the book and hit you with a club room (to which I won’t return).

Starpoints are move valuable than Gold Passport ones, but they are also more difficult to earn. I do like the ability to convert Starpoints at 1:1 ratio to airline miles + 5K bonus when you convert a minimum of 20K.

Nobody really knows what might happen with Starwood. They may be sold, taken private or there were also rumours that some hotel brands could be sold to other chains.

The main problem for me also are the lifetime Platinum benefits, as if it were business as usual I would get this in the next 12 to 24 months. I would expect that the lifetime benefits are honoured regardless who the acquirer might be.

Let’s hope that this situation with Starwood will soon come to a conclusion. The CEO gave a signal during the recent earnings call that they will try to get this issue resolved by the end of this year. 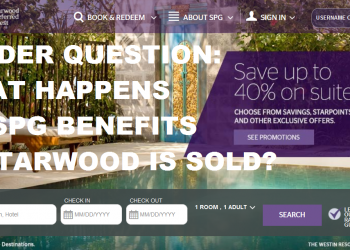 Reader Question: What Happens To SPG Platinum Benefits If Starwood Is Sold?