A LoyaltyLobby reader forwarded me an article that had appeared on Singapore Strait Times on Thursday regarding taxi drivers and airport employees planting live bullets and cases to travelers carry ons. 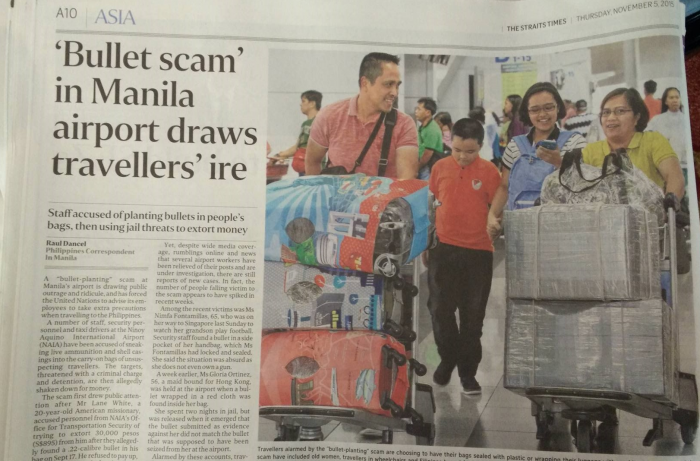 The security personnel then “shakes” the passenger for money unless he/she is willing to spend few days in jail.

You can access the Singapore Strait Times here of which below is an excerpt:

A “bullet-planting” scam at Manila’s airport is drawing public outrage and ridicule, and has forced the United Nations to advise its employees to take extra precautions when travelling to the Philippines.

The scam first drew public attention after Mr Lane White, a 20-year-old American missionary, accused personnel from NAIA’s Office for Transportation Security of trying to extort 30,000 pesos (S$895) from him after they allegedly found a .22-calibre bullet in his bag on Sept 17. He refused to pay up, and instead spent six days in jail.

Yet, despite wide media coverage, rumblings online and news that several airport workers have been relieved of their posts and are under investigation, there are still reports of new cases. In fact, the number of people falling victim to the scam appears to have spiked in recent weeks.

Mr Abaya said 1,394 cases have been recorded so far this year, compared with 1,813 last year and 2,184 in 2013. Yet, as he was speaking at the press conference, two more passengers were being held at the airport after bullets were discovered in their luggage.

Passengers traveling from or via Manila should be aware of this scam that is rather alarming. If the security and other personnel are willing to plant ammunition to passenger bags in order to extort money, it only makes you wonder what else they might smuggle through security.

As the article suggests, this is probably boom for those services that wrap your checked in bag into a plastic (personally I never use them).