The Maldives are experiencing troubled political times that culminated in bomb blasts, assassination attempts and now a State of Emergency. Can tourists travel to the island nation without worry? 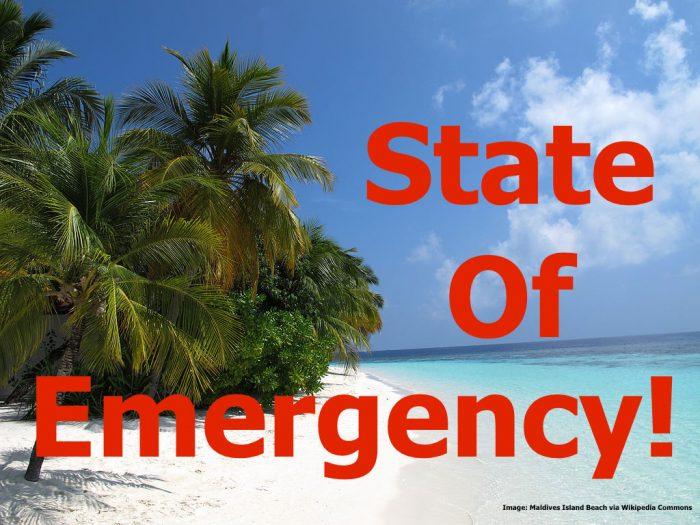 There is a wide mix of travel advisories and situation updates so we will look over a few sources and compile them here.

This State of Emergency came as the government was faced with multiple attempts to kill the President. During the investigation of these incidents several high ranking officials have been arrested including the Vice President of the Maldives.

Reuters has a comprehensive report on the situations (access here):

The Maldives declared a state of emergency for 30 days on Wednesday citing a threat to national security, as President Abdulla Yameen sought to shore up his power over the Indian Ocean island nation following a suspected assassination attempt.

The authorities acted after discovering explosive devices near Yameen’s official residence and the main mosque in the capital Male, as well as stashes of weapons believed to have been stolen from army stores.

“Because these would be a threat to the public and the nation, the National Security Council advised taking immediate steps to protect the people of Maldives,” Attorney General Mohamed Anil said in a live televised address.

Keeping in mind that the Maldives are a considerably small nation ‘a stash of weapons’ even though no specific numbers have been provided can mean anything. Maybe it’s just a few guns or something bigger. Nevertheless, having weapons in the hands of rebels always poses a certain degree of danger.

Senior ministers told Reuters the government would only make use of limited powers to restrict the right of assembly. There would no curfew or arbitrary detention.

“Please go ahead with your holidays — the Maldives are a peaceful country,” Foreign Minister Dunya Maumoon told Reuters. “There has never been a major incident targeting tourists.”

A Western diplomat in Colombo said European Union members may consider a travel advisory after the order, which comes just before the peak tourism season.

Britain advised its citizens after the order to “take extra care”, when traveling to the Maldives. A record 1.2 million tourists visited in 2014, accounting for 29 percent of the economy.

We all remember the terrible bomb attack in a Bali disco or the most recent bomb blast at Bangkok’s Erawan Shrine which is also a popular tourist destination with several of the deceased being tourists.

In the meanwhile I checked some travel warnings but so far no active alerts are put out.

See the Travel Advise of the British Home Office here.

The government of Maldives has said there will be no restrictions on tourist movements and that tourist resorts are unlikely to be significantly affected. You should take extra care and follow local advice.

Another travel advisory from the Australian Government is accessible here.

Many hotels in the Maldives are located on small atolls and it’s unlikely tourists will experience any major discomfort unless roaming around Male itself.

I looked at websites of several well known Maldives hotels that are popular with tourists such as the Park Hyatt Hadahaa or the Conrad Rangali Island. Neither of them had specific notices posted.

If you have travel booked and feel uncertain or uncomfortable going you might want to consider postponing or canceling it after consulting your governments travel advisories, your travel insurance and providers such as airlines and hotels.