A LoyaltyLobby reader sent me a question by email about issue she was having with United award that included travel on Avianca. 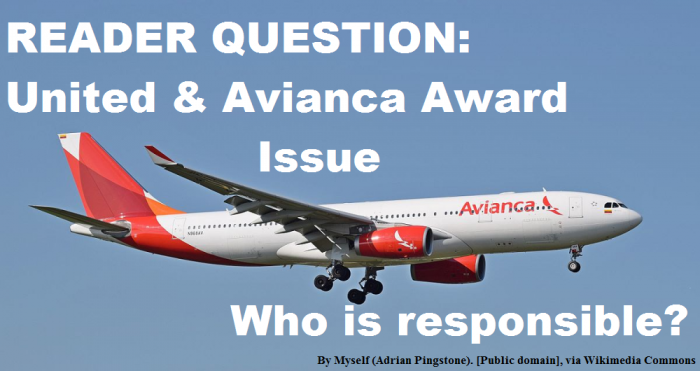 Here’s the email from Jenny:

Here’s the complaint that the reader sent to United using web form:

My complaint is about the communication between United and Avianca happened at the airport El Salvador (SAL) and how United handled this.

My flight was IAH-SAL on UA 1461 and then AV 955 from SAL-LIM. During the transfer at SAL, my husband and I were standing at the gate ready to board the AV 955 flight. When we arrived the gate, the gate door was still opened, there were people boarding the plane. However, Avianca staff ELMER said United told Avianca we couldn’t make it to the connection, hence they gave up our seats and we were not allowed to board the plane.

This was NOT true obviously. The 2 gates were close to each other, SAL is a small airport! Ironically, they also said that the flight was NOT full yet no boarding allowed for us! This is obviously discrimination.

We watched other passengers boarded, gate door closed, we kept asking the agent why we couldn’t get in, with the itinerary and seat assignment in our hands! The plane left, there was no united counter until we got outside the security.

At first, the immigration department (who didn’t speak English and we didn’t speak Spanish) was unwilling to let us enter the country, finally due to the situation, they issued a transition visa.

We also missed the connection from Lima on to Cusco the next day because there was no flight from SAL-LIM again until afternoon the next day!

This had delayed our trip by 2 days. We had a video of the gate agent, when we showed this video to the hotel front desk at El Salvador, the hotel agent recognized this Avianca agent always sent people to the hotel.

We strongly believed that not only there was miscommunication between United and Avianca, it seemed there were deals here purposely sending people to hotel. There were 5 other people in the same situation as us, with a couple missing a wedding in Lima because of this! If United is not doing something about this to compensate our loss and distressed situation, we will publish the video over the world.

Here’s the reply from United:

We value your feedback regarding your experience with Avianca Airlines. From what you describe, Avianca failed to meet your expectations for providing good service. Please accept my sincere apologies.

Our records does not reflect any documentation between United and Avianca in reference to any delay or misconnection of your connecting flight. United does not manage or enforce any policies with Avianca

Airlines or its staff.  If you wish to make a complaint in reference to the issues outlined in your email, please contact Avianca Airlines directly.  http://www.avianca.com/en-us/suggestions-complaints-form.aspx.

We appreciate when customers take the time to share comments and suggestions. Feedback like yours presents opportunities to improve or enhance our products and services.

Rest assured that we want to do everything we can to ensure that your travel needs are met. We understand air travel isn’t always easy, which is why we continually focus on improving our products and services.

We appreciate your business and look forward to welcoming you on board a future United Airlines flight.

And here’s reply to United:

1. I used United miles to claim this flight, so please don’t tell me it has nothing to do with United.

2. It is Avianca staff told us that United told them about canceling our seats due to United flight would delay landing in El Salvador. There were 7 total passengers in this situation, we were all witnesses and victims.

Here’s what I believe likely happened here. The United flight from Houston to El Salvador was delayed and the connecting time was under the minimum MCT allowed in El Salvador when passengers transfer from United to Avianca.

I doubt that United told Avianca to cancel/rebook the passenger, but the computer might have done this semi automatically or the gate agent saw the connecting flight details (delayed) and decided to offload the passengers due unlikely making the flight.

Although this ticket was issued by United, it was basically Avianca’s responsibility to rebook you to the ticketed destination using their or other airlines flights at the earliest convenience to you.

When looking at the flight that you were supposed to be on, it was last flight of the day to Lima even with connections. There would have been early morning flight at least on Copa that would have got you to Lima early afternoon the following day and you could have then just purchased one-way to Cuzco.

The fact that you had separate ticket from Lima to Cuzco is entirely different matter. If you choose to travel on separate tickets and there are irregular operations along the way, it is always possibility that you won’t make the flight and must pay for a new ticket.

The LIM-CUZ flights are not expensive and there are quite a few flights per day, so buying a ticket on the spot on LAN, Avianca, or Star Peru should have been possible.

When writing to an airline or hotels, you should always be as to the point as possible and without emotions. If I am fuming, I make sure that I am nowhere near my computer. It is better to sleep on the issue and write the complaint the following day.

United doesn’t owe you anything on this matter, although it was their flight that was delayed and ended up causing havoc down the road (they may throw some compensation miles on your way if you complain more though).

I find it unlikely that you will ever get any compensation from Avianca. Latin American airlines or business are not known for good customer service.

My point here is that you need to know what you are eligible for in case of delays. Avianca should have rebooked you on the earliest possible flights to your ticketed destination that they likely didn’t do. Airlines often play the game to their favor, but relent when they come across passengers that know what they are entitled to.

Reader Question: Is World Of Hyatt Viable Program Outside Of North America?