After yet another Ash Cloud problem following a volcano outbreak that cause hundreds of flights to be cancelled, Bali’s Denpasar Airport reopened Thursday night / Friday morning for traffic. 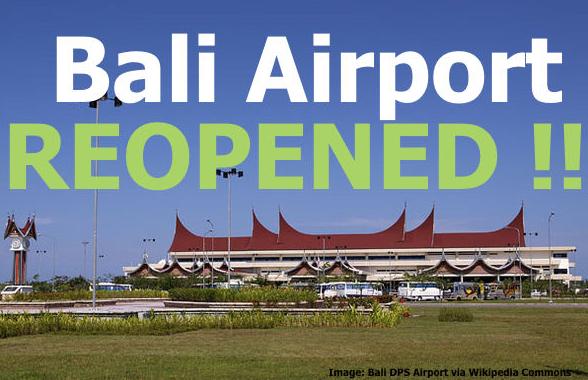 The airport has been effected by multiple volcano eruptions and subsequent ash clouds this year starting in July.

Each time, travelers have been stranded (literally) on the popular holiday island after hundreds of flights were cancelled. LoyaltyLobby reported the first time back in July (access here).

Last week the airport was closed again after Mt. Rinjani on the nearby island of Lombok erupted and spew ash into the air.

Reuters (see here) reported that again almost 700 flights were cancelled this past week due to the situation. Operations have since resumed and the passengers flown out as far as capacity allowed.

Indonesia has closed Bali airport, one of its busiest international terminals, cancelling hundreds of flights, because of ash spewed by a volcano on a nearby island, authorities said on Wednesday.

The resort island’s Ngurah Rai airport will be closed until Thursday morning and will reopen after a re-evaluation of the situation, officials said. “A total of 692 flights have been canceled,” airport authorities said in a statement.

Mount Rinjani on the nearby island of Lombok has been spewing ash since last weekend.

“Tremors due to volcanic activities are continuously recorded and potential of more eruption is still high,” the meteorological agency said in a statement.

Travelers who were effected found themselves stuck on Bali (could be worse really but doesn’t help if you have obligations such as work). Hotels usually have capacity available to house the overstaying guests since obviously no new arrivals are to be expected due to the airport closure.

Considering the frequency of this happening you might want to factor such a possibility in should you plan on visiting Bali. I myself plan to be back sometime in December or January as well.

Airlines are not obligated to accommodate passengers in such as case of force majeure beyond rebooking passengers onto the next available flight. Expenses for hotels, meals etc have to be covered by the passenger himself. I would recommend to check with your travel insurance prior to purchase if such a case is covered by the policy and which steps are to be taken in case you are effected.