In a bid to challenge aviation giants Airbus and Boeing, China embarked on an ambitious mission to build their own aircraft, the COMAC C919 for civilian service. 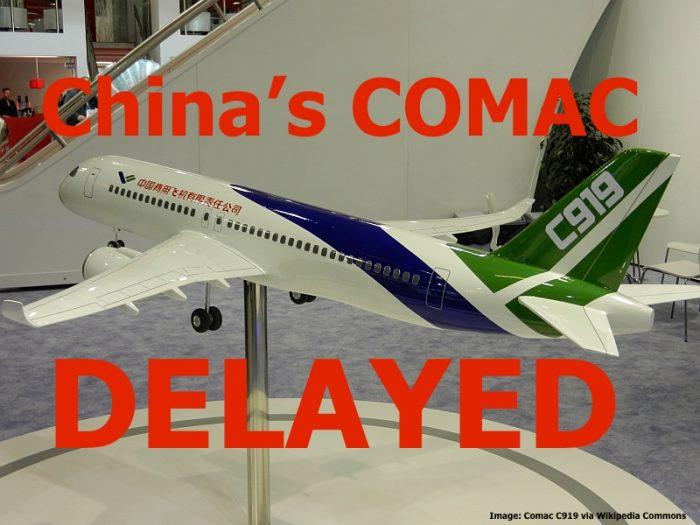 The maiden commercial flight for the COMAC C919 has now been delayed until 2019.

The COMAC C919 is the second aircraft model that is being built by the company with the first being the ARJ21 Advanced Regional Jet. The Chinese company Commercial Aircraft Corp of China (Comac) started the project back in 2002 but encoutered multiple problems. Today, 13 years later it just received the certification from Chinese authorities.

The Comac ARJ-21 regional jet, which can seat up to 90 passengers, received the Civil Aviation Administration of China (CAAC) type certification last December and will be delivered to launch customer Chengdu Airlines shortly, two people familiar with the plane’s program told Reuters.

Chengdu Airlines, a low-cost carrier, is expected to fly the plane on commercial domestic operations in the first quarter of 2016. Comac has received nearly 350 orders for the ARJ-21, mainly from Chinese airlines and leasing firms.

The plane will fly without U.S. Federal Aviation Administration (FAA) certification despite a five-year effort to have the FAA endorse CAAC’s certification procedures, the people said.

This sounds more severe than it actually is. In fact, as per the FAA, the plane was never meant to be certified at this point and with current specifications. They specifically outlined that it would be absolutely possible to certify derivative models of the ARJ21 or the C919 at a later stage if the models are airworthy and comply with all standards necessary.

As far as the C919 is concerned, The Economist (access here) had an interesting article today. about the project development.

On November 2nd COMAC, a Chinese state-owned planemaker, revealed its C919 plane (pictured, next page), a competitor to Airbus’s A320 and Boeing’s 737, the two most popular airliners in the skies. COMAC says the C919 will have its maiden flight next year—two years later than first scheduled—and enter service around 2019. …

Although the Russians and the Chinese may well be fairly good at designing aircraft, they have little experience in creating the complex production systems and supply chains needed to build them to the extremely high standards of reliability and safety that airlines expect. The need to improve their safety record will ensure that they are “not a near-term risk” for the likes of Boeing, says Jason Gurksy, an aerospace-industry analyst at Citigroup.

Indeed the efforts to actually rival the big three Airbus, Boeing and Bombardier require a lot of hard work and might still be in vain due to the stigma of the aircraft being ‘Made in China’ which doesn’t sit well with many international (and even some Chinese) passengers.

On a side note, a few months ago a close friend of mine flew with a gentleman who is a consultant to that project (I checked his name, very well regarded!) to Europe and at one point they talked about the future of the plane and it’s marketability. His conclusion as an expert was ‘I won’t fly with that plane until it’s been in service for a few years. They try to solve every problem with money and it’s highly politicized, the pressure of getting the plane in the air might get into the way of maintaining standards.”

I’m not a China basher at all cost but I value my life and in this case I didn’t need to hear anymore.

Conclusion
It’s not unusual that a project of this magnitude experiences delays. Even the Airbus A380 had countless delays and defects to overcome before it was finally delivered. Same with the Boeing 787 Dreamliner. Both manufacturers are established and well regarded for their products while for China this is completely new territory.

As far as the safety goes, I don’t think that I’m going to risk flying on these aircraft irrespective of price or airline until it has proven itself in daily commercial operation without incidents for a few years. That might be unreasonable but I just don’t feel comfortable with it. Just as I won’t fly a Russian made Ilyushin aircraft either.