Airlines in the U.S. and Europe have been getting a lot of flack lately for sending their aircraft overseas, mainly to South America and China for mechanical overhauls. What’s really up with that? 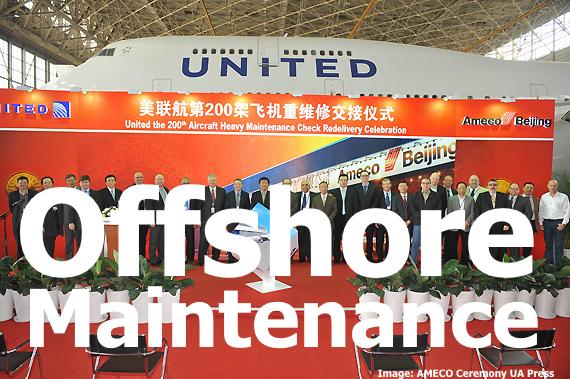 Critics come from various corners with the most dominant being the areas of safety- and economic concerns.

The argument is often made that technicians overseas, especially in developing countries are not that well trained as their counterparts in North America or Europe. Or that they might not speak fluent English. I would make the case that this is first and foremost not proven and and as far as the language goes irrelevant as long as they have proper manuals in their mother tongue.

It is a lengthy, detailed article and I’d suggest to read it in full as I can only provide a few excerpts here. In the beginning of the story the author shared an experience with a delay due to a technical issue with a plane swap.

… My own assumption, as yours might have been, was that the aircraft would be towed to a nearby hangar for a stopgap repair and then flown to a central maintenance facility run by the airline somewhere in the U.S. Or maybe there was one right here at the airport.

In any case, if it needed a major overhaul, presumably it would be performed by the airline’s staff of trained professionals. If Apple feels it needs a “Genius Bar” at its stores to deal with hardware and software that cost a few hundred dollars, an airline must have something equivalent to safeguard an airplane worth a few hundred million.

It is alleged that the offshore technicians do not have the same qualifications to perform maintenance as U.S. personell. That is hard to prove and disprove. I suggest that if the airlines technical management certifies the maintenance base then it fulfills the standards to a sufficient degree that maintenance can be performed without a second thought.

The comparison with an Apple store is plain fluff. The aforementioned Genius Bar is nothing else but a glorified acceptance counter for technical issues where people drop their items, neither is there staff there specially qualified to deal with computer maintenance. Rest assured the airlines way of handling and ‘safeguarding’ their aircraft is way more sophisticated than any computer repair counter would ever treat your personal devices.

Over the past decade, nearly all large U.S. airlines have shifted heavy maintenance work on their airplanes to repair shops thousands of miles away, in developing countries, where the mechanics who take the planes apart (completely) and put them back together (or almost) may not even be able to read or speak English. US Airways and Southwest fly planes to a maintenance facility in El Salvador. Delta sends planes to Mexico. United uses a shop in China. American still does much of its most intensive maintenance in-house in the U.S., but that is likely to change in the aftermath of the company’s merger with US Airways.

The airlines are shipping this maintenance work offshore for the reason you’d expect: to cut labor costs. Mechanics in El Salvador, Mexico, China, and elsewhere earn a fraction of what mechanics in the U.S. do. In part because of this offshoring, the number of maintenance jobs at U.S. carriers has plummeted, from 72,000 in the year 2000 to fewer than 50,000 today.

The ‘shop in China’ which has been mentioned is AMECO, a joint venture between Lufthansa and Air China which dates back to 1989. United is not the only legacy carrier customer. Obviously Lufthansa uses it as well and I have also seen Air Canada aircraft in the hangars at Beijing Capital Airport. Especially Lufthansa isn’t exactly known as a ‘cutting corners carrier’ when it comes to maintenance and the fact that they even co-founded the venture should attest for the integrity.

But the article shifts to the economic factors and cutback in technical jobs in the U.S. (and elsewhere assumingly). Obviously the reasons for the airlines doing so are economic nature considering the man hours necessary per C- or D-Check.

Let’s not forget the pressure U.S. airlines were under since the referenced year 2000. Since then all of them entered Chapter 11 at one point or the other. Air Travel became cheaper as well paired with rising fuel costs. So does this come as a surprise?

Safety is an issue here, too. The Federal Aviation Administration is supposed to be inspecting all the overseas facilities that do maintenance for airlines—just as it is supposed to inspect those in America. But the F.A.A. no longer has the money or the manpower to do this. …

There are 731 foreign repair shops certified by the F.A.A. around the globe. How qualified are the mechanics in these hundreds of places? It’s very hard to check. In the past, when heavy maintenance was performed on United’s planes at a huge hangar at San Francisco International Airport, a government inspector could easily drive a few minutes from an office in the Bay Area to make a surprise inspection. Today that maintenance work is done in Beijing.

This is a good point. The F.A.A. is critically underfunded and understaffed and that’s not a new situation but has been going on for decades. With the volume of air traffic ever rising, budget for the F.A.A. has been steadily decreased. To the point of which such surprise inspections of maintenance facilities became an absolute exception. Ask a U.S. based aircraft technical when he has last seen a F.A.A. inspector in his hangar and chances are he’ll laugh at your face.

The article cites a few and in my opinion important cases of faulty maintenance (again, I really suggest to read the whole article) but there are also plenty of cases where faulty repairs and sloppy maintenance has been conducted in the U.S. including instances that lead to deadly crashes (Alaska Airlines Flight 261 for example).

In the end both carriers and customers have to draw a line at where our comfort zone ends. When it comes to aircraft maintenance there are multiple layers of protection, check and balance mechanisms and visual inspections… yet still accidents are going to happen.

Without trying to shift blame for technical deficiencies from one corner to the other I think it’s important to shift away from the perception that everything which is done on home soil is the best and can’t be done in similar fashion elsewhere in the world with little to no difference in quality. This situation is simply a product of globalization and (let’s not forget that) deregulation of the aviation sector.

While it’s theoretically easier to monitor domestic facilities from a regulation point of view, this point has little weight if even those domestic inspections are carried out on a very small basis. There are certainly huge differences in quality when it comes to outsourced maintenance. The old saying ‘you get what you pay for’ holds true again. Reputable airlines in most cases do their best to facilitate just as reputable maintenance facilities, not some backwater garage.