Most frequent travelers have encountered a situation where the carriers customer care doesn’t respond appropriately to a legitimate complaint. One option to escalate these issues are national enforcement bodies and ombudsmen. 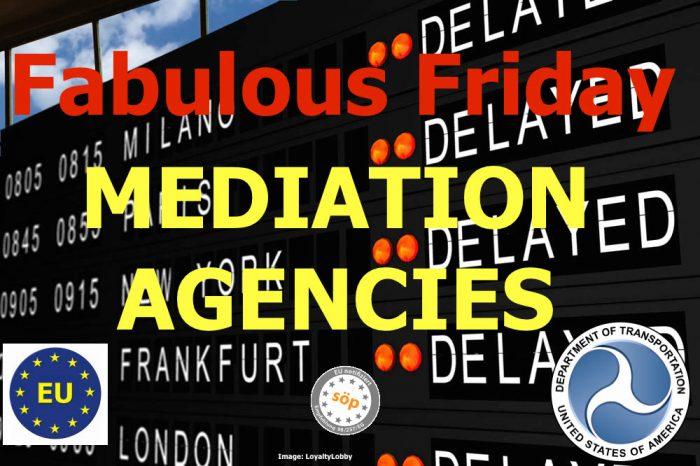 Instead of involving a small claims court or an attorney straight away I have often suggested to involve a mediation agency first with a good chance of success. Today we will have a look at these.

Complaints that are usually difficult to resolve involve those cases where there was a monetary damage or where there is monetary compensation due. These instances could be downgrades, delays involving compensation per EU261/2004 regulation or baggage damages.

Airlines are naturally hesitant to pay out cash, in particular when the customer ha no significant frequent flyer status with that airline. Instead when a customer files a complaint and claims the amount in question they often offer transportation vouchers in various amounts even though the customer is clearly entitled (by law) to a cash compensation.

In cases where the value exceeds the due compensation or if the customer plans to purchase a ticket anyway and the voucher has the same value as the original compensation amount that can be ok. In some cases however, and there are airlines who are notorious for this, the customer service department tries to low ball the passenger and undercut the due amount dramatically. Or there is simply no answer at all to your claim.

Here are two cases I have recently encountered myself and forwarded to mediation agencies which I will describe later.

In the first case it was a very straight forward matter. Lufthansa had a technical problem with their feeder flight to Frankfurt airport which made us miss the connection to North America. I claimed the EU compensation of 600 EUR for each passenger per email (webform) and registered letter but did not receive more than an automated reference number over 2 months.

The German Conciliation Body for Public Transport (söp_Schlichtungsstelle für den öffentlichen Personenverkehr) was founded in December 2009 and deals with complaints regarding travel by train, bus, airplane or ship. If the traveler does not receive a satisfying response to his or her complaint from the transport company, he or she can contact söp. söp assesses the conciliation request and makes a settlement suggestion to resolve the dispute amicably and out of court. This saves money, time and trouble for all parties involved.

The website referenced above outlines all further details but keep in mind that the actual process will be in German language only and is designed for consumers residing in Germany (or maintaining an address there).

The first step in the process is to forward the matter to the travel company in order to give them the opportunity for a statement regarding the conciliation request. With the statement of circumstances, the söp creates the basis for a decision. The applicable following legal examination of the facts and the law then is conducted independently and neutrally, as it would be in court. Once this process is finalized, the interests are balanced. söp then produces a report with a recommendation for an amicable settlement.

All the conciliators at the söp are fully qualified lawyers. The söp is bound only by law and justice. The recommendation by söp aims to allow an amicable out-of-court settlement of the dispute. However, the recommendation is not legally binding. The recommendation is only binding if both, the complainant and the transport company, agree to it. Each side is free to decide to take their case to court at any time of the process.

The ombudsman office provides the service free of charge to the consumer while receiving funding from the individual transport companies. This is an advantage because there are no legal costs and risks involved such as it would be the case should you hire an attorney. Given that (as referenced) the ombudsman staff are all lawyers I’m sure they will outline the legal basis of your claim just as way as your own lawyer would, maybe just not as aggressively. Should you still not come to a solution after the mediation you can always take the case to court.

More publicly known and applicable to cases where the airline or customer resides in the U.S. or if traffic touches U.S. soil is the Consumer Protection Division of the U.S. Department of Transportation. You can access their website here.

You can file your complaint with the Department of Transportation online or via letter mail. The DOT then considers the claim if it’s in their jurisdiction and will send a letter to the airline requesting their statement of events. The fact that you contacted the authorities regarding your matter is usually enough to make the airline take your claim seriously as long as it has substance.

There is a big difference between the DOT and the aforementioned German ombudsman though. The DOT will not negotiate with the carrier about compensation for you, their task is to determine if the airline violated U.S. law and potentially fine the carrier. The DOT can not force the airline to decide in your favor, should there be no outcome after this step your option is to file a claim in small claims court (probably the most price sensitive option) or hire an attorney. That’s pretty much the nuclear option.

United Airlines issued me a 300$ Transportation Voucher for the paid ticket downgrade on Denver to Los Angeles after I filed my complaint through the DOT. Initially they offered 75$ and wouldn’t budge. It was 1 segment out of four and I found the 300$ suitable. All complaints filed with the D.O.T. will be entered into a database and published in a monthly report.

First and foremost it is required to contact the airline first and see if there is an appropriate response. If not then you can employ the method of contacting a mediator such as suggested in this article. Using a mediator requires the case to be serious and properly documented. Don’t take some willy nilly complaint over a bad seat assignment to such an office because it will no go anywhere and also it wastes valuable resources/manpower.

I would always suggest to go the mediating route first before investigating legal avenues. It’s simply a cost/benefit matter and also makes your life much easier. The most straight forward cases are those involving EU261 compensation. There are clear guidelines of who is eligible and what the parties are required to prove. By now many legal services have jumped on the EU Compensation claim and offer to handle your case for a cut of sometimes 40% of the total compensation. I think a literate person doesn’t need to use these services unless it’s worth it to you and you don’t like to file the matter yourself.