A new survey recently conducted found that from a long list of annoyances, fellow travelers that kick others seats are the most hated group of inconsiderate passengers.

Right on the heels of these unruly individuals follow inconsiderate parents and smelling (stinking!) passengers sitting next to you.

This is a great survey and certainly reflects some of my own sentiments to be completely honest. It has been conducted by Expedia with roughly 1,000 participants.

Our behinds are telling us something about flying in today’s age: We’re tired of being kicked in the rears.

This was the key finding from Expedia’s 2015 Airplane Etiquette Study, from which data overwhelmingly indicated that “Rear Seat Kickers” are the most aggravating co-passengers at 35,000 feet. When asked to choose from a list of annoying behaviors, 61 percent of 1,019 study respondents cited butt-kickers as the worst of the worst.

“Inattentive Parents,” parents who exhibit little or no control over their children, ranked a close second with 59 percent; while the “Aromatic Passenger,” that passenger who exhibits poor hygiene or is in some other way giving off a strong scent, was the third least-liked fellow traveler, garnering 50 percent of the vote.

While I personally don’t have that much experience with passengers frequently kicking my seat (maybe that happened 3 or 4 times in 17 years of flying) I can certainly resonate with points two and three. You often see parents who completely disregard their children and other passengers with them, showing no sign of entertaining the child properly so it would stop crying.

Smelling passengers are even worse. Absolutely disgusting. I rather have a crying baby who I can entertain myself in the worst case than a smelly seatmate whose odor I can’t escape. 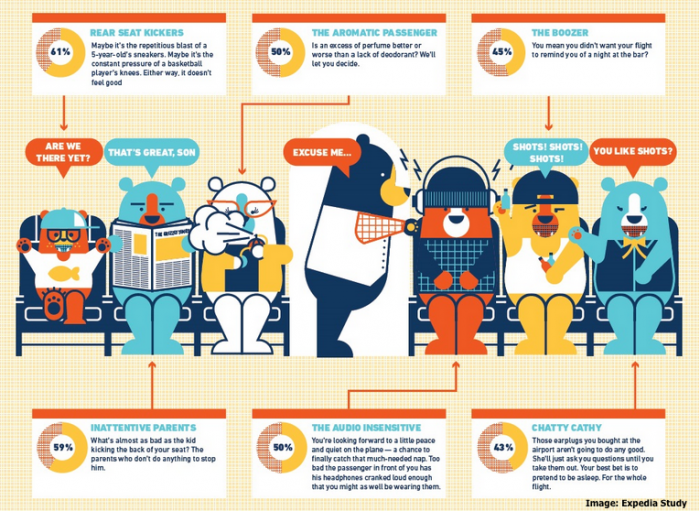 The complete ‘pet peeve ranking’ can be found in the official news release (see here).

I think the more frequent you travel, the more your focus shifts to smaller things that go on your nerves. The ‘Overhead Bin Inconsiderate’ is another one of my personal enemies for example.

The concluding remarks of the study are interesting.

Finally, results from the Expedia 2015 Airplane Etiquette Study indicate that passenger shaming is not nearly as prevalent as some would have us think.

In the event a fellow passenger misbehaved noticeably, 49 percent of respondents would sit quietly and attempt to ignore them, while 21 percent would confront the offender directly and 10 percent would surreptitiously record them using a phone’s camera or video camera. Only 3 percent of respondents would publish the misbehavior across social media.

Hanging my head in shame I have to admit that I’m guilty of this. If I see certain extreme cases of misbehavior there is a strong probability that I’ll record the moment and share it either privately or here on LoyaltyLobby for your ‘enjoyment’.

Sometimes it’s hard for seasoned travelers to put up with the antics of leisure passengers and I’d guess at the same time it’s just as annoying for those ‘regular folks’ when priority boarding is announced and an armada of elite passengers waltzes through them (because they stand in the way nevertheless).

The least offensive passengers I have experienced worldwide are the Japanese. It’s always a pleasure to fly on Japanese carriers such as ANA or JAL so that sometimes I will even take a connection over a direct flight just to avoid certain carriers (such as recently on my flight from Beijing to Vancouver where both Air China and Air Canada would have been available – I took ANA).