The big question-bubble about who buys Starwood Hotels has burst this morning: Marriott International, a name that was never mentioned among the hot candidates will acquire the company and form the worlds largest hotel group. 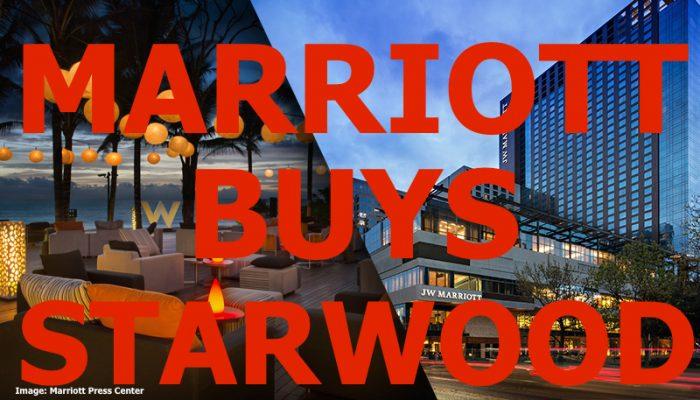 This means exciting times to come for customers of both chains but also employees and investors that will be part of this mega fusion.

Starwood has been actively looking for an interested party to acquire them and since early this year many names had been in the roulette starting with IHG, a Chinese investor and most recently Hyatt Hotels. None of them came up on top and I think Marriott pulled a big rabbit out of the hat this morning, surprising everybody with these news.

Marriott International, Inc. (NASDAQ: MAR) and Starwood Hotels & Resorts Worldwide, Inc. (NYSE: HOT) announced today that the boards of directors of both companies have unanimously approved a definitive merger agreement under which the companies will create the world’s largest hotel company.  The transaction combines Starwood’s leading lifestyle brands and international footprint with Marriott’s strong presence in the luxury and select-service tiers, as well as the convention and resort segment, creating a more comprehensive portfolio.  The merged company will offer broader choice for guests, greater opportunities for associates and should unlock additional value for Marriott and Starwood shareholders.  Combined, the companies operate or franchise more than 5,500 hotels with 1.1 million rooms worldwide.  The combined company’s pro forma fee revenue for the 12 months ended September 30, 2015 totals over $2.7 billion.

By volume alone this is a remarkable transaction but looking at it from the hospitality position, this acquisition will form the largest hotel chain in the world. The transaction is expected to close Mid 2016. 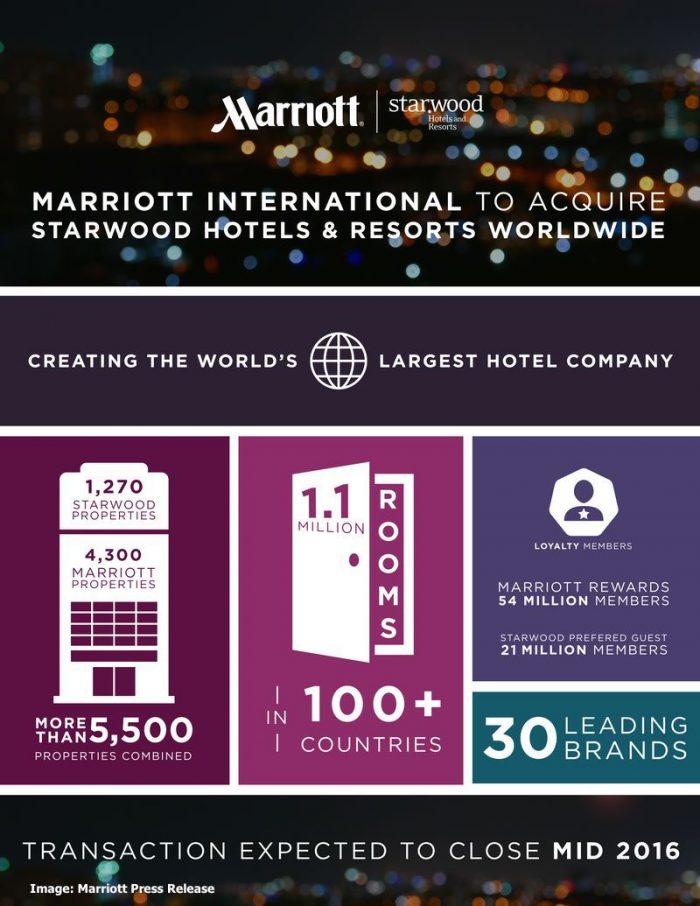 As far as the transaction itself is concerned, Marriott published the following:

Under the terms of the agreement, at closing, Starwood shareholders will receive 0.92 shares of Marriott International, Inc. Class A common stock and $2.00 in cash for each share of Starwood common stock. On a pro forma basis, Starwood shareholders would own approximately 37 percent of the combined company’s common stock after completion of the merger using fully diluted share counts as of September 30, 2015.  Total consideration to be paid by Marriott totals $12.2 billion consisting of $11.9 billion of Marriott International stock, based on the 20-day VWAP (volume weighted average price) of Marriott stock ending on November 13, 2015, and $340 million of cash, based on approximately 170 million fully diluted Starwood shares outstanding at September 30, 2015.  Based on Marriott’s 20-day VWAP ending November 13, 2015, the merger transaction has a current value of $72.08 per Starwood share, including the $2 cash per share consideration.

J.W. Marriott, Jr., Executive Chairman and Chairman of the Board of Marriott International, said: “We have competed with Starwood for decades and we have also admired them. I’m excited we will add great new hotels to our system and for the incredible opportunities for Starwood and Marriott associates.  I’m delighted to welcome Starwood to the Marriott family.”

Now, the golden question for all those of us invested in Starwood Preferred Guest and Marriott Rewards with points balances and Lifetime Status at stake: What will happen to our accounts?

John wrote about exactly this two weeks ago as part of the Reader Questions feature (see here).

The closing will probably take close to a year during which they would operate as separate companies (no sharing of information etc) and another year before anything would happen to the loyalty program.

Starwood writes about this in their own press release (access here):

Today is the first day of a long journey as we combine our two companies. For now, we remain separate, and there is no change to your SPG program status, your Starpoints® or your existing reservations. You will continue to earn Starpoints and elite stay/night credit for your stays, as well as bonus Starpoints for any promotions in which you are participating. There is no change to how you manage your SPG account or book reservations.

There are additional discrepancies between these two companies apart from the Loyalty Program. The Best Rate Guarantee with Marriott for example is a complete sham. On the other hand, Marriott still offers the lucrative travel packages.

Right now the closing is expected to be completed Mid 2016 but with a transaction of this size there are always regulatory hurdles so a delay might be possible as well.

No doubt this came as a big bang this morning. Personally I am more invested in Hyatt (Diamond) and SPG (Platinum, Lifetime Gold [only 50% to LT Platinum]). I do not hold any status with Marriott and therefore I prefer this transaction much more over the initially suggested scenario of a Hyatt-Starwood Merger. The same might hold true for Marriott Members who like their current program.

Those of us with SPG Lifetime Status might be a bit nervous in regards to how this will be honored in the future. Let’s hope this merger won’t go like the United-Continental one where the worst of both worlds was mixed to a giant mess. Only time will tell. For now we can all sit back and relax – at least there is certainty now!